Former UFC strawweight champion Joanna Jedrzejczyk has an opinion on who should be the next title defense for Weili Zhang, and it is certainly not Carla Esparza.

Joanna Jedrzejczyk remains the longest-reigning champion in the UFC’s strawweight history with five successful title defenses. Her title reign began with a TKO victory over Carla Esparza at UFC 185, and at UFC 248, she was one round on one judge’s scorecard away from beginning her second title reign, only for Weili Zhang to take home the split-decision victory.

Recently, Dana White stated that he heard Rose Namajunas does not want to be world champion and so that would leave Carla Esparza as the next challenger for Zhang. Joanna Jedrzejczyk has a hard time visualizing the former champion in a 2021 title fight, though, and believes there is someone else clearly more deserving of the next shot at Zhang.

“I really believe that Rose will be the next challenger for the strawweight title,” Jedrzejczyk said in an interview with the South China Morning Post.  It’s going to be very interesting.

“When I hear this bullshit about Carla Esparza, with all the respect to Carla Esparza, she made it to the league, she was the strawweight champion back in the day, but I feel like the top 4 in the strawweight division is different than before. If you make it to the top 10, top 5, you’re good. But if you make it even higher, you can see the difference.”

When asked what her thoughts were on Dana White’s claim that Rose Namajunas does not want to be champion, Jedrzejczyk gave her candid thoughts on what may have led to these remarks from her beloved boss.

“I feel like maybe it’s a game,” Jedrzejczyk said.  “Maybe they’re trying to push her, but Rose is a very smart human being, and she’s going to make the right decision at the right time.

“Rose is next. She deserved that, and she’s next…I don’t see Carla facing Weili Zhang,” Jedrzejczyk said with a chuckle. “I don’t see it.”

Can you picture Carla Esparza challenging for the world title again?

This article first appeared on MMANews.com. 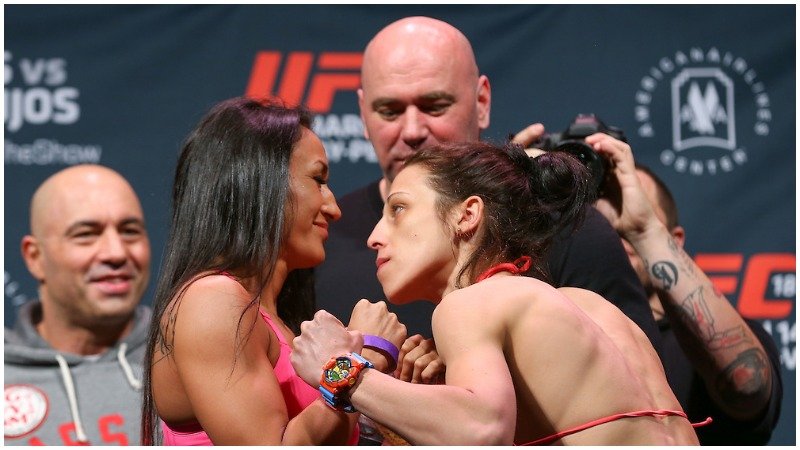