Jessica Andrade Was Surprised By Shevchenko’s Game Plan At UFC 261
published on September 23, 2021
curated and posted by BRWLRZ Team

Jessica Andrade isn’t used to being tossed around.

Whether she’s lifting her opponents above her head to slam them on the mat or landing one-punch KOs, not many women can match Jessica Andrade’s muscle in the Octagon. But when the former strawweight champion turned flyweight contender met Valentina Shevchenko at UFC 261, she got a taste of her own medicine.

“I was somewhat surprised when I faced Valentina,” explained Andrade while speaking with MMAJunkie. “We put together a strategy for her, but she brought a different game. After she took me down, I found myself in the place I planned to have her. That’s my game – it’s what I do in my fights. It confused me that she took me down, in my style, since she’s such a good striker. But each fight is unique.”

Shevchenko had little issue getting Andrade to ground in their bout. Known for her background in Muay Thai, the flyweight champion landed seven of seven takedowns attempted that night. Andrade went 0-2 looking for her own. The women find themselves on the same card again this weekend, but with different opponents.

Aside from a couple of close defeats to Amanda Nunes, Shevchenko has looked all but unstoppable since joining the UFC. This weekend, “Bullet” will attempt to defend her strap for a sixth time when she meets Lauren Murphy. Andrade will open the PPV portion of the card against Cynthia Calvillo as both women will be looking to move back into the win column.

Should Andrade and Shevchenko meet again down the road, Andrade believes things would go differently.

“Someone has to win, and someone has to lose. It wasn’t my day. With a rematch, I’m very confident I’ll be ready for everything – takedowns and striking. I feel if she had chosen to use her boxing or muay Thai, I would have done a lot better.”

Were you also surprised by the way the Shevchenko/Andrade UFC 261 fight played out? 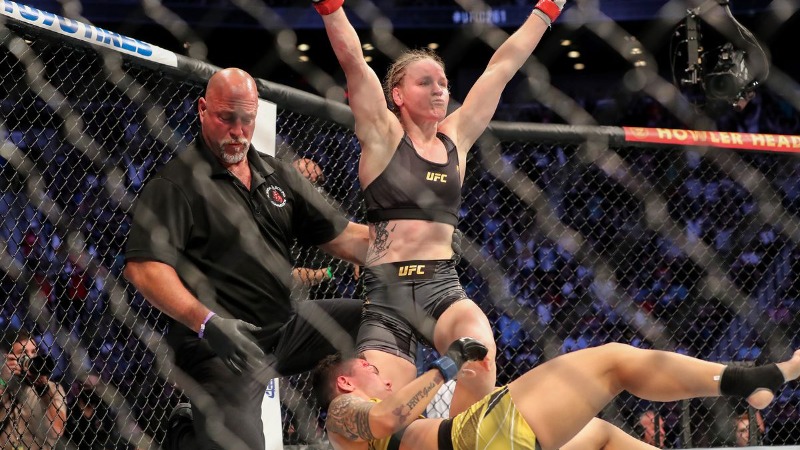