A UFC triple champion? There is one female Brazilian who views this as a possibility, and it’s not the current double-champ Amanda Nunes but former strawweight champion Jessica Andrade.

Jessica Andrade knows what it’s like to hold UFC gold. Andrade was able to capture the strawweight championship at UFC 251 when she put her nickname of “Piledriver” (Bate Estaca) to good use when she slammed Rose Namajunas onto her head and into unconsciousness. Unfortunately for Andrade, just as suddenly as her title reign began, it would also have a swift conclusion when Weili Zhang defeated her in 42 seconds by TKO. Andrade is now looking to earn flyweight championship gold in a bout against reigning champion Valentina Shevchenko, and if she succeeds, she will double-back to vie for the strawweight title once again.

“I told Dana [White], I told the UFC that right now I’m floating, I’ll be wherever they need me,” Andrade told MMA Fighting. “If I win the flyweight title, I definitely want a chance to fight for the belt with Zhang Weili again and maybe become a two-division champion.”

Amanda Nunes is only one title away from becoming a triple champion, but Nunes has never competed at flyweight nor expressed a desire to. Meanwhile, fellow Brazilian Jessica Andrade has competed and won in three different divisions, the first female to do so in UFC history. So Andrade believes that it’s possible for her to be a triple champion and that even becoming a double-champion at strawweight and flyweight  would be more impressive than Nunes’ current reign as double-champion at bantamweight and featherweight.

“It’s easier for Amanda because there are almost no girls at 145, and she fights once a year at 135,” Andrade said. “At 115 and 125, I would have to fight at least six times a year, so that would be more complicated. But reclaiming the 115 title is definitely something I want really bad.”

“Who knows, maybe I go crazy down the line and want to fight for the [bantamweight] belt too, right?” Andrade said. “Anything can happen in life. Can you imagine? I’ll have three, it would be great. A champion in three different weight classes, that will be great.”

Do you think Jessica Andrade has the potential to be the first-ever UFC triple champion? 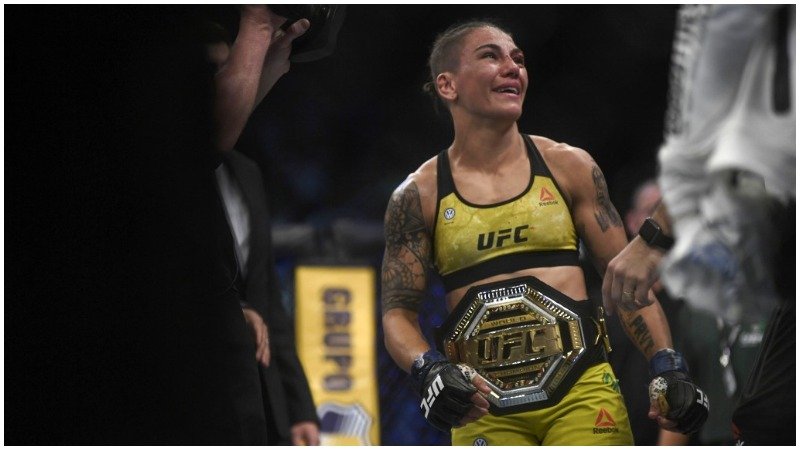