Hooker On FW Move: We’ll Cross Volkanovski Bridge When We Get To It
published on December 7, 2021
curated and posted by BRWLRZ Team

Dan Hooker has spoken about the prospect of moving down to a featherweight division currently ruled by teammate Alexander Volkanovski.

Hooker, who began his UFC career at 145 pounds, has seen the initial success he achieved after moving up to lightweight stall. Having followed a 3-3 featherweight stint with a 7-1 start at 155 pounds, which saw “The Hangman” add the names of Gilbert Burns, Al Iaquinta, Paul Felder, and James Vick to his résumé, Hooker’s pursuit for gold hit a roadblock at the top five.

Since a main event victory in his home country last February, Hooker has seen Dustin Poirier, Michael Chandler, and Islam Makhachev have their hands raised at his expense. In an effort to revitalize his career, the 31-year-old looks set to return to his old stomping ground in 2022.

Hooker Not Fazed By Joining Division Ruled By Teammate

The UFC featherweight throne is currently occupied by Volkanovski, a City Kickboxing teammate of Hooker. “The Great” successfully ascended the weight classes’ mountaintop with a victory over Max Holloway in 2019, a feat he repeated in his first title defense seven months later.

Having now brushed aside the challenge of Brian Ortega, Volkanovski, who is riding a 20-fight winning streak, has staked his claim as one of the most dominant active champions in the promotion.

In a recent interview with It’s Time For Sports, Hooker was asked about the possibility of meeting his friend and teammate inside the Octagon if he commits to a featherweight switch. After stating they’d “cross that bridge” when they arrive at it, “The Hangman” suggested having multiple members of the team high up in a division is not a bad scenario.

“It’s like, cross that bridge when it comes to it. That is the same as like, Brad (Riddell) in my division at lightweight. It’s never a bad position to be in. To have your training partners or your group of friends so good at fighting that you might, potentially, have to fight each other to be the best fighter in the world. That’s not the worst situation. But it’s like, I want Volk to win as well and I see him being super successful as well.”

With the ever-changing scope of each division, Hooker also mentioned that his path may never cross with that of Volkanovski, who he predicts will go onto big things in the next few years.

“The landscape of something can change so quickly in this sport. Over the next year you could see Volk doing some incredible things. You could see Volk moving up to lightweight and being a double champ, and then, you know, fighting Conor McGregor and walking away with $20 million or something crazy. That’s what I see for Volk. You can’t beat me. I want him to win as well, I want Brad to win as well, I want my teammates to be successful as well. It’s not like I want to be successful at their expense. I want to be successful but I want to see them do some incredible things as well.”

Before reaching the stage where he enters contention, Hooker will first have to establish himself at 145 pounds and record some wins. In what would be a pretty tough first assignment, “The Hangman” recently revealed a clash with “The Korean Zombie” Chan Sung Jung would be at the top of his list of desired fights.

Whoever he ends up facing, there are certainly some exciting matchups for Hooker, with the likes of Calvin Kattar, Giga Chikadze, and Shane Burgos all awaiting him at featherweight.

Would you like to see teammates Dan Hooker and Alexander Volkanovski collide at featherweight? 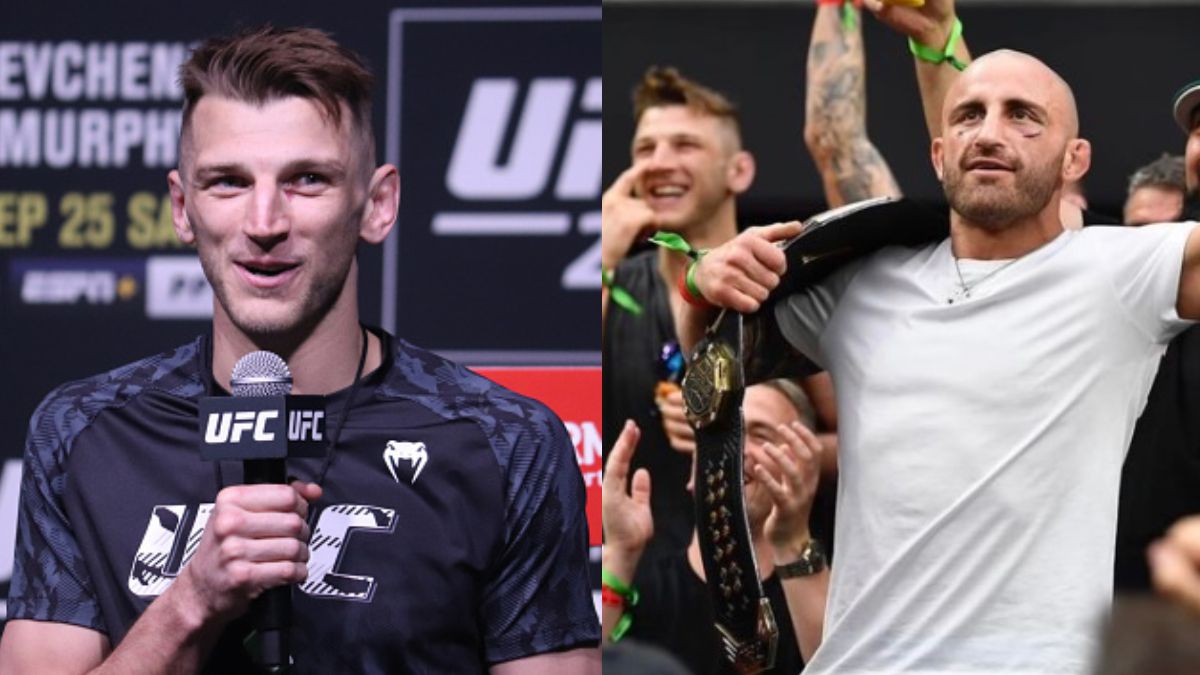