Holland Admits Daukaus Won Their Fight Based On Street Rules
published on October 4, 2021
curated and posted by BRWLRZ Team

Despite their fight at UFC Vegas 38 being ruled a no contest, as far as Kevin Holland is concerned, Kyle Daukaus defeated him twice in one night.

After riding into 2021 off the back of five remarkable wins last year, Holland’s hype train had about as much momentum as it could have. However, two comfortable defeats to Marvin Vettori and Derek Brunson damaged the 28-year-old’s stock and raised questions over his ability to defend takedowns.

“Trailblazer” hoped to return to the win column against the unranked Kyle Daukaus this past weekend. Despite showing improved takedown defense, something he let Daniel Cormier at cageside well aware of, Holland’s positive start came to a crashing halt.

With less than two minutes of the opening round remaining, the #14-ranked middleweight was briefly knocked out following an accidental clash of heads. Having fought back to the point where referee Dan Miragliotta canceled his plans to step in and stop the contest, Holland submitted to a standing rear-naked choke moments later.

After a period of confusion and a lengthy discussion outside of the Octagon, which included a review of the footage, the decision was made to rule the bout a no contest as a result of the accidental clash of heads.

While many fighters, fans, and pundits have concluded that the right call was made, Holland himself believes he was beaten fair and square by Daukaus. “Big Mouth” suggested that it’s his responsibility to defend himself at all times, something which he says he didn’t do prior to the clash of heads.

“I never thought about a no contest,” Holland said during the UFC Vegas 38 post-fight press conference. “I’m not that type of person. As far as I’m concerned, he knocked me out and choked me out in one fight. If it was a street fight, he would have got the job done.

“I mean kung-fu first, defend yourself at all times. I didn’t defend myself from the headbutt, that’s my fault.”

Discussing what appeared to be a flash knockout, Holland confirmed that he was unconscious and woke up with Daukaus on his back. Despite suggesting he was beaten twice this past weekend, he did admit that the KO left him dizzy and in a tougher position when it came to escaping the submission that concluded the fight.

“I believe [I was knocked out],” Holland said, “Because I know for fucking sure I didn’t get taken down. All of a sudden I feel a motherfucker on my back, so yeah, had to be flash [knocked out] for a second.

“I felt myself a little dizzy on the ground. I felt a little harder to breathe in the choking situation. I figured I was pretty fucked up in that situation.”

I didn’t know what happened. I also don’t know how the rules are defined in that situation.
I do know he didn’t take me down. 🤠 yeeeehaw
Run. It. Back. Bucko. pic.twitter.com/W5Ta8Qch42

Did you agree with the decision to rule the Kevin Holland vs. Kyle Daukaus fight a no contest? 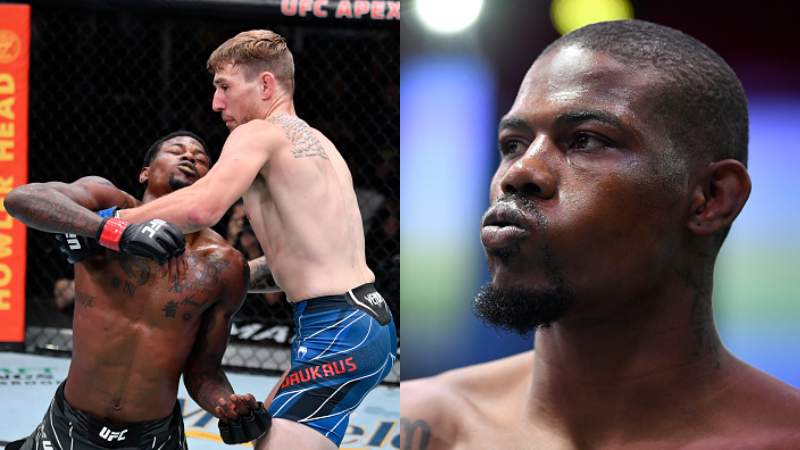