Ariel Helwani has taken it upon himself to defend the honor of his fellow MMA journalists and the entire MMA community against retired UFC heavyweight Brendan Schaub.

Today, we bring you another episode in the feud between renowned MMA reporter Ariel Helwani and Brendan Schaub. It all started with Helwani disputing claims made by Schaub and Joe Rogan about the journalist’s career. It would soon escalate with Helwani issuing a “final warning” to Schaub about mentioning his name again. So naturally, Schaub went and mentioned Helwani’s name again.

“This is what MMA media has to do,” Schaub began on his BELOW THE BELT podcast. “They have to come up with something to get clicks. They have to. This is what they do.

The “this” Schaub is referring to is regarding an op-ed article that began circulating about Joe Rogan needing to be replaced from the UFC commentary team. Though Helwani had nothing to do with this piece, Schaub believes such journalism is a symptom of the larger disease of negativity that he feels plagues the MMA media.

“So it’s people, these soy boys that are outside the realm—bro, all these guys, all these journalists, all these bullshits websites, you’re not even in the club. As Chris Brown says, you’re in the line trying to get in the club. You can never get in the club. You’re not it. So what they do is the line of people outside the club who need to be relevant and talk shit to get clicks. Cuz nobody’s paying attention. Unless you book some big-name fighter or you have 17 fighters on your show, nobody gives a fuck about your personal opinion. So you have to muster something, trying to figure it out because everything you’ve ever done has never worked out for you. That’s how these guys operate.

“Even this will bring on shots,” Schaub predicted. “Just saying this. I don’t give a fuck, I don’t see any of it. You guys are sheep, and you write articles like this, or you have to interview 17 fighters (for) people to tune into your show, been fired from every job you’ve ever had. It is what it is. Haters gonna hate.”

Schaub was right about one thing. These latest comments did indeed bring on more shots.

During his “On The Nose” segment of The MMA Hour, Helwani was fielding questions from viewers about a wide array of topics. Among them was Brendan Schaub’s latest comments aimed at the MMA media.

Before diving in with a detailed response, Helwani stated that Schaub’s “subtle” barbs at him were not missed. More importantly, he expressed that he felt compelled to speak up on behalf of the entire MMA community in exposing Schaub’s fakeness.

Helwani went on to explain that MMA journalists devote their lives to giving fighters the recognition they lack from mainstream media outlets. And while he disagrees with the editorial on Rogan, the journalist had a right to express his opinion. He pointed out that op-eds featuring the personal views of the author have always been a part of journalism. And while he commended Schaub for sticking up for his friend, the author was not out of bounds for having an opinion.

Helwani would then turn his attention to Schaub’s own professional endeavors in the climax of his “Heelwani” promo.

“Now, let’s talk about you,” Helwani began as if verbally rolling up his sleeves.

“And it was a great moment. I mean, we talked about it on this show. He put you over. You were the biggest babyface in the biz. You had it, silver platter. You had it. You were going after everyone. You were on this show, that show, you were the guy, the truth-teller. But how did those gigs go? And how are they going now? Don’t talk about other people’s jobs.”

Helwani would also point out the irony of Schaub himself spending his podcasts talking about what’s circulating in the MMA media. Yet, he still finds the time to call MMA journalists and devalue them as professionals. He also accused Schaub of plagiarizing the content of others, even dropping some names of his victims for good measure. You can view the full “On The Nose” segment below.

If another episode of Heelwani vs. Big Brown drops, we’ll be sure to bring you all the latest dirt right here at MMANews.com! 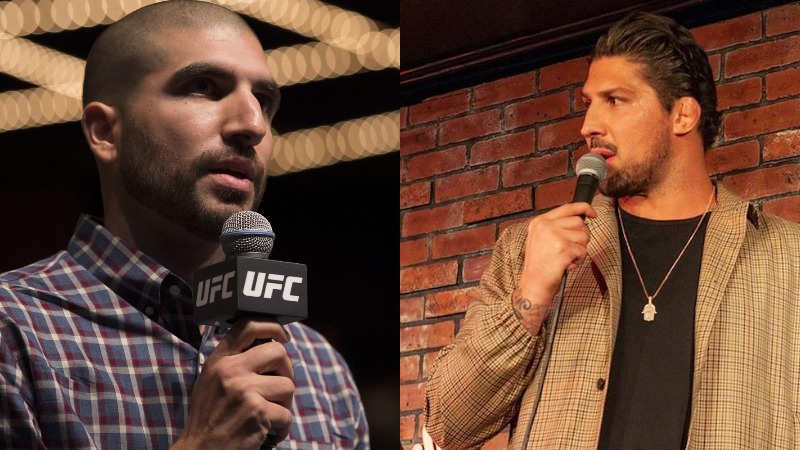