Harrison: Meeting Dana White Was The Most Awkward Moment Of My Life
published on November 15, 2021
curated and posted by BRWLRZ Team

Harrison has moved into free agency following her recent million-dollar win at PFL 10. This means that she will likely be shopping herself around to potential organizations. There is a good chance the judoka will meet with the likes of Scott Coker and Dana White while figuring out where her next fight will take place.

Yet, according to Harrison, she has already met White, but the circumstances were much different at the time.

“I met Dana one time, and it was the most awkward moment of my life probably,” Harrison shared on the Punchin’ In podcast. “There was a UFC card in Boston back before I did MMA. I think I just started training maybe at DellaGrotte’s or something. And I went to the car, and my buddy owned a restaurant in Boston that Dana went to. I taught the guy’s kid judo. I’m really good friends with him.

“But he was like, ‘Oh, man, Dana’s gonna be at the restaurant. You gotta come! I wanna introduce you!’ da-da-da. And I was like, ‘OK, cool.’ I was like, ‘Whatever. That’ll be fun.’ And I was with someone at the time. So me and this person go in to the restaurant after the fights, and it’s closed. And it’s just Dana with a room full of people, they’re having dinner. Like, they’re in the middle of their meal.

“And we walk in and the guy I’m with is like, ‘Oh, this is Kayla Harrison! You gotta meet her! She’s gonna fight for you someday! She’s the best thing!’ And da-da-da-da-da. And then he’s like, ‘Oh, and this guy fights for you, too, already!’ and da-da-da-da-da. And I had to go around. And I literally shook every person’s hand at the table. And the guy was like, ‘Oh, cool.’ Dana was like, ‘Nice to meet you.’ You could tell he was like, ‘Why is this happening in the middle of my meal?’ And I was so embarrassed. I wanted to be like, ‘This wasn’t my idea! Don’t judge me!’”

Since the uncomfortable meeting, Harrison has become one of the most talked about athletes in mixed martial arts. The Ohio native has looked all but unstoppable in her three-year stint in the sport. This means a conversation between the pair would look much different now. But thinking back to her cringy meeting with White, Harrison knows that she wasn’t the first or last person to be introduced to White in such a way.

Currently, neither the UFC nor Bellator has a women’s lightweight division. Harrison’s trip to featherweight showed she could hit the 145lb. mark, but we’re still not sure if she could consistently. White has been his usual critical self when asked about the gold medalist. The UFC president stated she should “stay where she is” and keep collecting a million dollars every year instead of going to the UFC to fight Nunes.

Aside from a one-off fight during in Invicta FC, every one of Harrison’s bouts have taken place under the PFL banner. The Invicta match was her lone fight at featherweight, the division that houses Harrison’s biggest threats in  Amanda Nunes and Cris Cyborg.

Of course, this is likely just another negotiating tactic on White’s behalf. As a fight promoter, it would be very odd if he wasn’t interested in a super fight between Nunes and Harrison down the road. 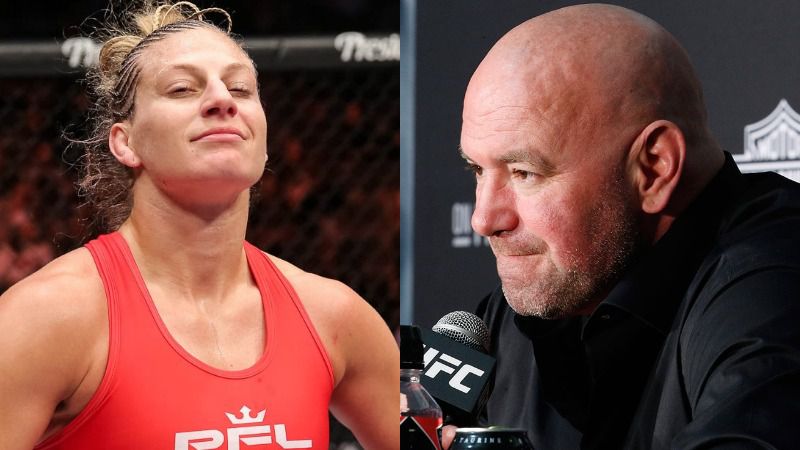