Gaethje: I’m F*cked If My Striking Isn’t Better Than Oliveira’s
published on December 23, 2021
curated and posted by BRWLRZ Team

UFC lightweight contender Justin Gaethje knows it’s crucial he’s at his best on the feet when he challenges reigning champion Charles Oliveira for the title in 2022.

Having secured his #1-contender status in his latest outing, a triumph over Michael Chandler in a Fight of the Year contender at UFC 268, Gaethje had a close eye on the UFC 269 main event earlier this month as his likely next opponent was decided.

The December 11 headliner saw champion Oliveira defend his title against Dustin Poirier. “The Diamond” entered the fight off the back of two victories over former two-division champion Conor McGregor. He was unable to recreate that success, however, as “Do Bronx” upset the odds yet again, submitting the Louisianan in the third round to successfully retain the lightweight gold.

Gaethje Hopes To Avoid A “World Of Trouble” Against Oliveira

Even after eight straight wins, culminating in a memorable title crowning at UFC 262, many continued to doubt Oliveira leading into his defense against Poirier. That included Gaethje, who suggested the Brazilian was a “quitter” and refused to recognize him as champion until he defeated Poirier.

Having accomplished the latter and evidently proven the former wrong, the reign of “Do Bronx” is well and truly established and will run into “The Highlight” next.

Following UFC 269, Gaethje spoke to ESPN MMA’s Brett Okamoto. Acknowledging the well-rounded game of Oliveira, which saw him trouble elite striker Poirier on the feet at times, Gaethje knows he has to be at his best on the feet to ensure he makes the most of his advantages.

“At the end of the day, if my striking isn’t better than his, I’m fucked, per se. That’s where I’m great,” Gaethje said. “I’m great at creating pressure, creating damage, and stopping takedowns. So ultimately, he is going to be trying to get it to the ground because I’m gonna find so much success in the striking department.

“He is incredibly dangerous in the striking department, his knees, his elbows, his ability to create pressure, control distance; second to none. But I better be better, or I’m gonna be in a world of trouble.”

With his power, speed, and endless pressure, there aren’t many better tests to Oliveira’s standup game than Gaethje. But the Brazilian finished Chandler on the feet this year and troubled Poirier with knees and elbows this month. The champ is certainly no slouch on the feet, something the #1 contender is well aware of.

Will Gaethje be able to impose his will standing? Or will Oliveira grapple his way to victory like Khabib Nurmagomedov did against “The Highlight” in 2020? We’ll likely find out in 2022.

Who do think will have their hand raised in the likely next lightweight title fight, Justin Gaethje or Charles Oliveira? 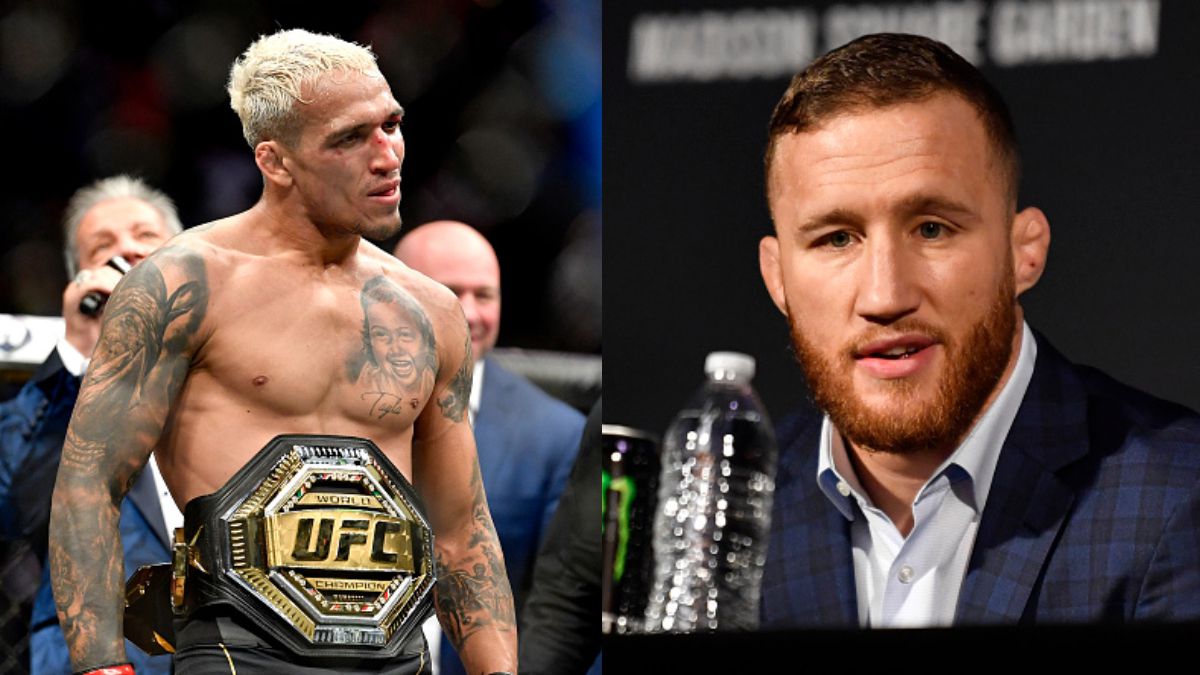