From ‘Barbie Girl’ To Brutal KO, Tai Tuivasa Explains His Walkout
published on December 15, 2021
curated and posted by BRWLRZ Team

UFC heavyweight Tai Tuivasa has provided some reasoning behind his UFC 269 walkout this past weekend in Las Vegas.

After viciously knocking out Stefan Struve, Harry Hunsucker, and Greg Hardy, all of whom fell in the first round, Tuivasa had his chance to rise further up the rankings at the final pay-per-view of the year on Saturday night.

With another memorable finish, Tuivasa did just that, sleeping Augusto Sakai in an awkward position against the cage. The victory saw another shoey takeover in front of a sold-out crowd, secured a second consecutive Performance of the Night bonus for Tuivasa, and helped “Bam Bam” move up to #11 in the heavyweight rankings.

Brutal, right? So brutal that you’d be hard-pressed to find a scarier finisher who vibes to ’90s pop music on his way to the Octagon.

Before erupting the T-Mobile Arena at UFC 264 by knocking out Hardy, the Australian looked to intimidate the former NFL defensive end by walking out to… Spice Girls. Yep, Spice Girls. But who can fault the method when we saw a 6 ft 5 in, 260 plus-pound behemoth crumple unconscious to the canvas? Maybe we should all be listening to “Wannabe.”

After the disappointment of Tuivasa’s clash with Sakai initially being set for the small APEX facility passed thanks to the fight’s transfer to UFC 269, the question on everyone’s lips? What would Tuivasa walk out to this time?

When one MMA media member tried to draw the answer out at media day, the 28-year-old wasn’t biting. Instead, he promised another “banger.”

“I’ve always got a banger on the way. Definitely, now the crowds are back, they’re always gonna get better with the crowds. I’ve got one up my sleeve. You should just wait till Saturday and we’ll pump it then.”

When Saturday came, what were we treated to? A 1997 classic from Aqua, “Barbie Girl.” Nothing confuses the brain quite like a huge heavyweight capable of shutting anyone’s lights out strolling between the barriers to a song played at the birthday parties of most five-year-old girls.

Maybe that’s the secret? Lure his opponents into a false sense of security and get them distracted by singing along to goofy songs in their heads? Or maybe Tuivasa is just an entertaining, charismatic, and fun-loving individual who doesn’t take life too seriously. If everything we’ve seen about “Bam Bam” is true, it’s certainly the latter.

During his appearance at the UFC 269 post-fight press conference, which came after he performed enough shoeys on his way to the back to floor a university fresher at their first party, Tuivasa was asked what made him choose to serenade the Vegas crowd with a dose of ‘Barbie Girl’.

His response? As hilarious as you’d expect.

After the initial laughter died down, the Australian knockout artist suggested everyone loves a bit of Aqua.

“You can’t tell me you don’t love that song! Come on! Everyone! When that comes on, you know you’re boppin’. The crowd loved it, I loved it, and the rest is history.”

Ultimately, that’s the best bit about Tuivasa. Fans love nothing more than knockouts. But what’s better? A funny individual who is able to entertain and draw a smile out of full arenas and those watching at home before flat-lining his opponent inside the Octagon. It truly is the best of both worlds.

With everyone loving and enjoying his style, including himself, who would want him to change his ways? Well, maybe Greg Hardy and Augusto Sakai.

At just 28, it stands to reason we have a whole lot of Tuivasa walkouts left to experience, and if he continues his current form, perhaps we’ll see him making his way to the Octagon to face Francis Ngannou or Ciryl Gane with ‘Blue’ by Eiffel 65 over the speakers. We can only dream…

If you’re an Aqua fan, a “Barbie Girl” like Tuivasa, want to pretend you’re “Bam Bam” walking to the Octagon, or want to imagine the heavyweight powerhouse doing a shoey in the back of a pink convertable, we’ve attached the music video below for your listening pleasure.

Don’t say MMA News doesn’t have you covered when it matters!

What song would you like to see Tai Tuivasa walk out to for his next fight? 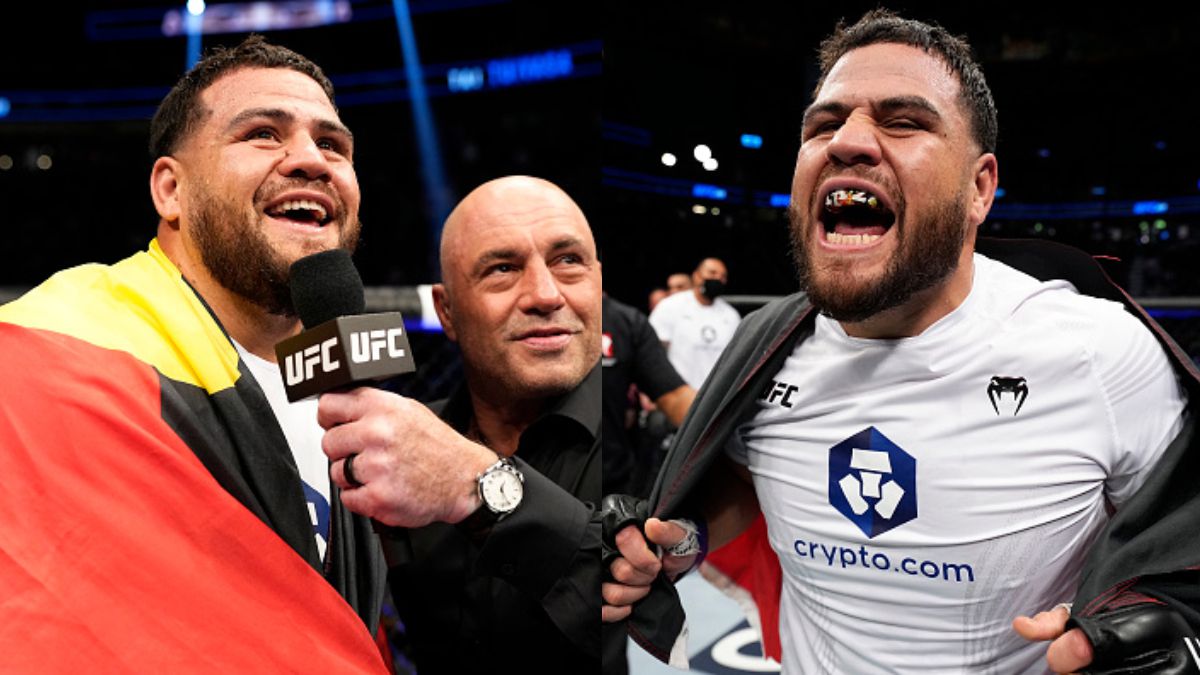