Fighters React To Valentina Shevchenko vs. Lauren Murphy At UFC 266
published on September 26, 2021
curated and posted by BRWLRZ Team

Valentina Shevchenko vs. Lauren Murphy was exactly what fans thought it would be – a one-sided fight.

The showdown served as the main event of the UFC 266 pay-per-view event on Saturday night (Saturday, 25, 2021) from Las Vegas, Nevada at the T-Mobile Arena.

As seen in the fight, Shevchenko outshined her in every way possible whether it was speed, landing shots and even on the ground. Murphy was gunshy and rightfully so as Shevchenko was throwing missiles. Shevchenko landed a takedown to end the first round. Murphy had nothing with her striking. Shevchenko landed a takedown in the second round. By the third round, Shevchenko was already being heavily praised by the commentators. Murphy tried her best to land strikes, but wasn’t doing much damage. Instead, she stood there like a punching bag. In the fourth round, Shevchenko finished her with strikes on the ground to retain the women’s flyweight title.

Since moving back to the flyweight division, the champ was riding a seven-fight winning streak coming into the event. She recently beat the likes of Jessica Andrade via TKO at the UFC 261 pay-per-view event Jennifer Maia at UFC 255, and got a TKO win over Katlyn Chookagian at UFC 247. On the flip side, Murphy has complied

Valentina was on a different level.

What I can advice everyone in this world is : Keep your faith and always stay patient and strong with every test in this life. This is just the beginning……….

Valentina looking untouchable like Mighty Mouse in his title run. Just truly on a different level than every other flyweight! #UFC266

is there a fighter who can with valentina in the 125 pounds? #UFC266

Shevchenko is soo technically sound.
Her timing and footwork is ridiculous #UFC266

Damn! She’s a fast as a…bullet

Lauren has to actually take a risk. Make the champ question SOME part of her game! #UFC266 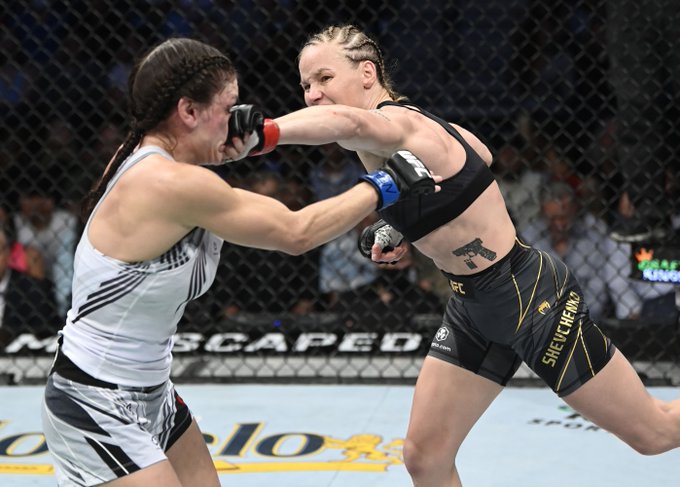