Fighters React To Thiago Santos vs. Johnny Walker At UFC Vegas 38
published on October 3, 2021
curated and posted by BRWLRZ Team

Thiago Santos vs. Johnny Walker was not what everyone had hoped to see.

The showdown served as the main event of the UFC Vegas 38 event on Saturday night (, 2021) from Las Vegas, Nevada at the UFC Apex facility.

As seen in the fight, the first round was skippable and that’s putting it lightly. There was little to no action aside from a few leg kicks. Moving along to the second round, Santos went for a takedown, but Walker stuffed it and they landed shots when getting up. Through the third round, Walker started to get more loose with his strikes, but wasn’t throwing in volume. Santos was out landing him. Walker had the advantage in the fourth round. They continued to strike in the fifth round. Santos cracked him with a big right hand. A very close fight due to lack of output. The judges gave the win to Santos by decision.

This was an important contest for both guys. Santos had dropped four straight losses before this fight. Santo dropped a split decision loss to then-UFC light heavyweight champion Jon Jones at the UFC 239 pay-per-view event in July 201, Glover Teixeira via submission in November 2020 and then a decision defeat to Aleksandar Rakić at UFC 259. On the flip side, Walker dropped a decision loss to Nikita Krylov in March 2020, but rebounded with a KO win over Ryan Spann in September 2020 heading into the fight.

That was the slowest Brazilian dance I’ve ever seen, and I watch a lot of videos on Worldstar #UFCVegas38

Who’s winning not the spectator

10 more mins and still not 1 jab lmao these boys in trouble!!!

Hands up, chin down, throw some punches!!!

I feel like nothing as happened this whole fight

MMA News has you covered with results, highlights, and post-fight tidbits from UFC Vegas 33. Be sure to keep checking the homepage for the latest news. 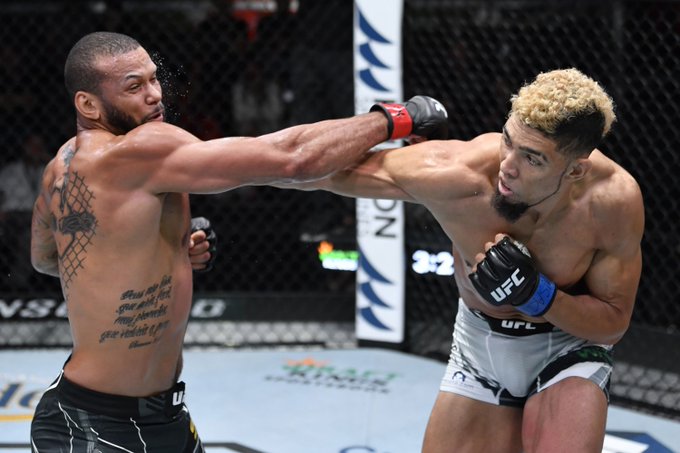