Coming out of UFC 268, there was one item of controversy surrounding the main event between Kamaru Usman and Colby Covington. Though the final scorecards had some dissenting opinions, that’s not what most of the debating has been about. No, that would be the topic of whether or not Colby Covington broke Kamaru Usman’s 100% takedown defense record.

UFC commentator and former Olympian wrestler Daniel Cormier made his stance on the matter clear during the UFC 268 broadcast. In the third round, Covington attempted a takedown on Usman, bringing the champion down to his knees briefly two times, only for Usman to pop right back up.

Cormier and MMA coach Din Thomas insisted that it was a takedown despite the UFC statisticians saying otherwise. The UFC’s reasoning was touched on during the broadcast, which is that Covington did not maintain enough control over Usman for the attempt to count as a successful takedown.

In the aftermath, Colby Covington has scoffed at being denied a takedown against Usman and insists that he got two takedowns, thus ending Usman’s 100% takedown defense rate.

But was it really a takedown? If not, then why not?

According to the UFC’s stat-recording process, which is determined by FightMetric, a takedown is awarded when a fighter deliberately grapples his opponent to the ground and establishes an advantageous position for an appreciable amount of time.

The phrasing of “appreciable amount of time” is what Covington failed to establish according to the language above. Cormier, as someone from a wrestling background, has a different view of what constitutes a takedown. When arguing that Covington got a takedown over Usman, Cormier stated “that’s two points.” He was referring to the points awarded for a takedown according to NCAA rules, when the following takes place:

If a wrestler gains control of another wrestler on the mat, he will be awarded two points for a takedown. The exact position of the takedown can vary, but in order to earn the points, a wrestler needs to start in neutral position and take control of both ankles and have his opponent on the mat without being held down by his opponent.

In wrestling, a takedown is awarded simply by bringing the opponent down, regardless of how long they were held there or controlled. As you can see, this language differs from that of the UFC’s.

UFC officials have even directly confirmed this interpretation, yet many people still continue to be upset about it.

Replies to this are the most fired up that I have seen people be about something that really had no bearing on the outcome of the fight whatsoever. https://t.co/LNy3nEGGcJ

Though Covington’s takedown attempt being deemed unsuccessful may seem counterintuitive, there is some consistency from the UFC on this issue. In fact, there is a past precedent for the same thing happening in Usman’s 2018 fight against Demian Maia.

YouTube user MMA Access took a dive into the UFC 268 takedown controversy, and he brought attention to Maia’s takedown attempt of Usman. Maia’s attempt was very similar to Covington’s, and yet also was not awarded due to a lack of sustained control. You can watch Maia’s takedown defense at the 1:12 mark of the video below.

In a recent installment of DC & RC, Daniel Cormier caught up with Usman himself for some quick banter about #Takedowngate. Based on this interaction, it seems as though both men are unfamiliar with the official reason Covington was denied the takedown.

In summary, MMA takedowns are not the same as wrestling takedowns. As the Maia takedown attempt illustrates, there is really no telling how many other fighters may have benefited from this variance of how a takedown is defined. But unquestionably, as the current record holder and standing alone as the only fighter with a 100% takedown defense rate, no one has benefited more from this difference than Kamaru Usman.

The embedded video is posted under the protection of Fair Use for the purpose of news reporting and analysis. The copyright owner may contact us to have it removed. 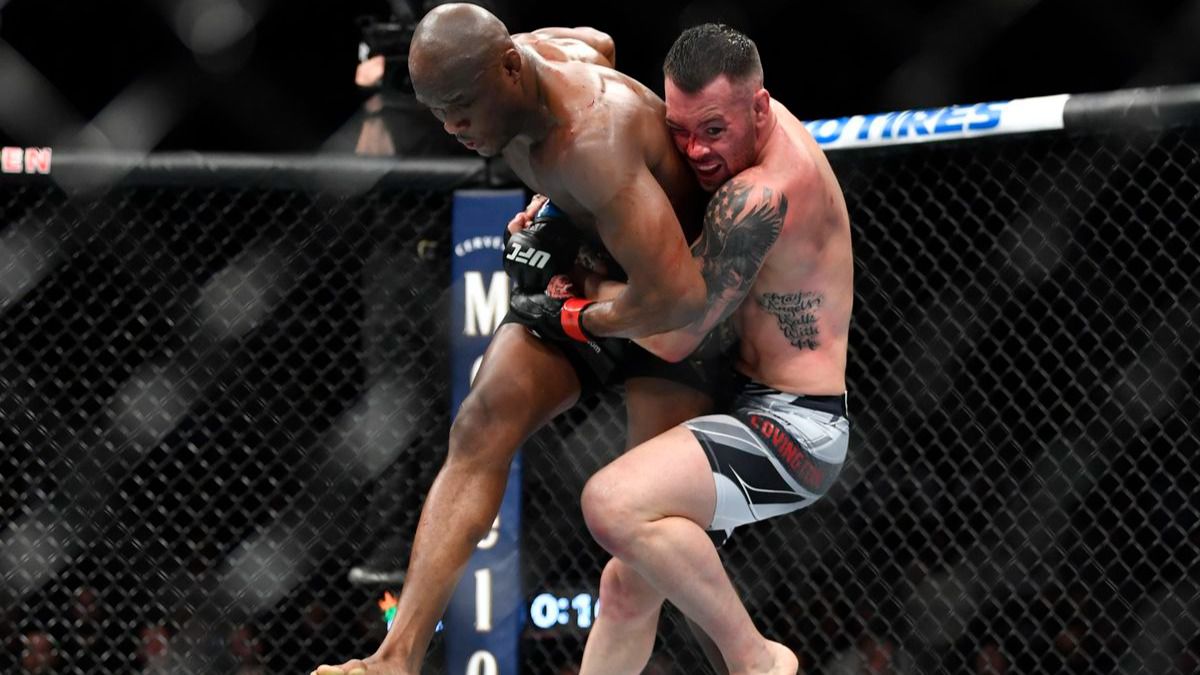