UFC bantamweight TJ Dillashaw has suggested that 135-pound champion Aljamain Sterling may never return to action as a result of the neck surgery he underwent earlier this year.

Sterling went under the knife soon after his championship crowning at UFC 259. Against then-champion Petr Yan, “Funk Master” was being comfortably beaten until the Russian struck him with an illegal knee while he was a downed opponent. With the 32-year-old unable to continue, “No Mercy” was disqualified and Sterling became the first champion in UFC history to be crowned due to a DQ.

After taking time away to recover from surgery, Sterling was scheduled to make his first title defense in an inevitable rematch against Yan at UFC 267 this month. Unfortunately, lingering neck issues meant the champ failed to get medical clearance and had to withdraw. While he faces some more time on the sidelines, Cory Sandhagen is set to clash with Yan for the interim gold on October 30.

One man who’d almost certainly have been first choice to replace Sterling had he not had surgery of his own is TJ Dillashaw. The former UFC Bantamweight Champion returned to action at UFC Vegas 32 in July. In a competitive and enthralling main event, the 35-year-old secured a split decision victory over Sandhagen.

Having jumped straight into the rankings at #2, Dillashaw had been anticipating a title opportunity in early 2022 against the winner of Sterling vs. Yan 2. He was required to undergo knee surgery as a result of his fight with “The Sandman,” thus ruling him out of a short-notice title fight with the #1-ranked bantamweight this month.

With the latest changes to the title scene, his plans may have been spoiled. It now stands to reason the winner of Yan vs. Sandhagen will meet the champ inside the Octagon early next year in a unification bout, likely pushing a championship opportunity further back for Dillashaw. However, the Californian believes that may not actually be an issue. During a recent appearance on Ariel Helwani’s The MMA Hour, Dillashaw suggested Sterling may never return to action because of the complications surrounding his neck surgery.

“I think he’s just holding onto this belt as long as he can. I’ve had that feeling already so when he pulled out of the fight, I wasn’t surprised. I bet he’s dealing with nerve damage. I bet he’s dealing with a lot of stuff. You go get your neck cranked on with what he’s had done, it’s definitely not good. We’ll see. I could be completely wrong but I don’t know if he’s ever going to come back.” (h/t MMA Fighting)

Dillashaw added that he doesn’t understand why Sterling chose to have the surgery when he did. The former bantamweight king cited the injuries he carried while he was champion, suggesting Sterling should have taken advantage of the big fights and big paydays ahead of him.

“You’re on top of the world. You’re champion. Yeah, you won it the way you did but now you’re going to start getting paid like a champion. You’re going to have these big fights. Take advantage of them while you can. Don’t go out and get this neck surgery.

“I understand he’s got the problem, he has the injuries. I was dealing with two blown out shoulders when I was the champion but I wasn’t willing to sit out for a year cause I had big paydays.”

Without addressing Dillashaw’s comments on why he underwent the surgery when he did, Sterling responded to the claim that he won’t return in a post on Twitter. “Funk Master” asserted that despite the procedure, he’ll certainly be back.

Not a small procedure by any means. But I KNOW I will be back! Just gotta keep things moving in the right direction. https://t.co/LlHR2oclel

“Not a small procedure by any means. But I KNOW I will be back! Just gotta keep things moving in the right direction.”

Do you think Aljamain Sterling will return to defend his bantamweight title? 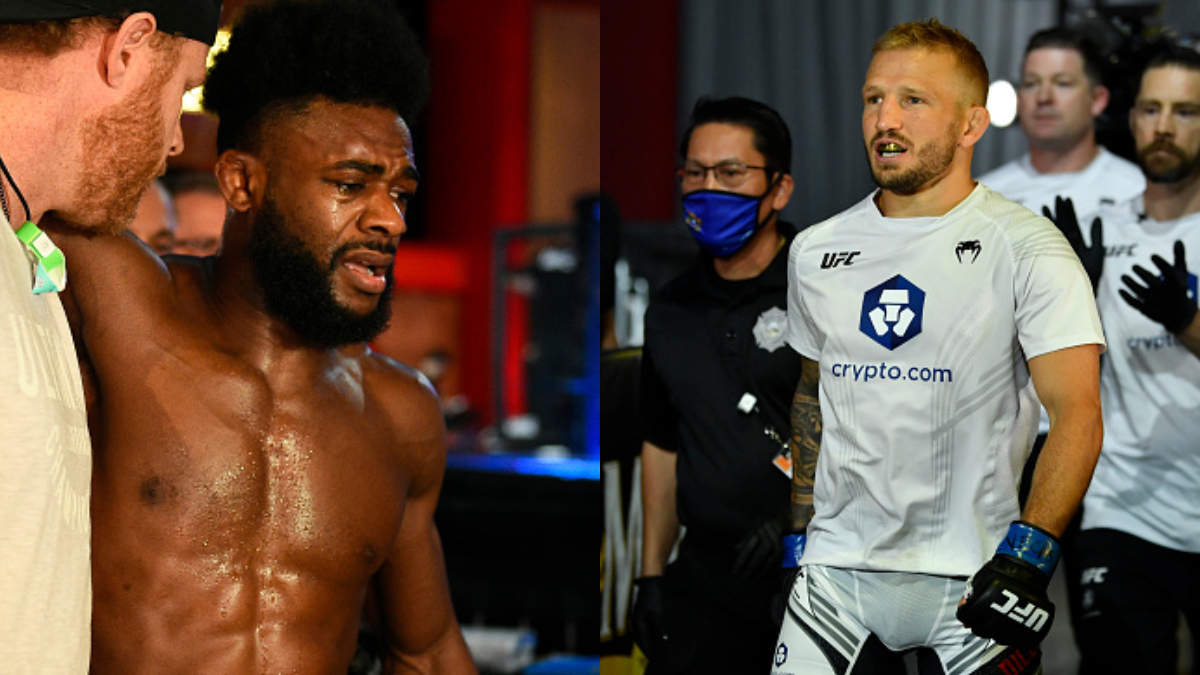