UFC lightweight Beneil Dariush has claimed he’s more deserving of a shot at the 155-pound title than whoever wins the Justin Gaethje vs. Michael Chandler clash at UFC 268.

Dariush’s red-hot form went largely unnoticed prior to his most recent Octagon appearance. After defeats to Edson Barboza and Alexander Hernandez, the Iranian-born fighter was largely written off as a contender. Nearly three years later, the 32-year-old has built a seven-fight win streak, and secured the #3 spot in the lightweight rankings.

After getting back on track by defeating the likes of Thiago Moisés and Drew Dober, Dariush burst back onto the agenda with a memorable comeback knockout against Drakkar Klose at UFC 248. After another highlight-reel KO against Scott Holtzman, the UFC veteran had the opportunity to climb up the rankings against Carlos Diego Ferreira. Having fallen on the right side of a split decision, the California resident booked a meeting in the cage with fan favorite Tony Ferguson.

At UFC 262, Dariush completely dominated “El Cucuy” across three rounds. In a similar fashion to Charles Oliveira, the Brazilian Jiu-Jitsu black belt prevented Ferguson from utilizing any of his weapons and cruised to a comfortable unanimous decision victory.

Having stepped away from action for the birth of his child, Dariush is ready to continue his quest to achieve UFC title glory. In a recent interview with The Schmo, the surging contender revealed he’s targeting a December return, and is willing to be backup for the UFC 269 main event between champion Oliveira and Dustin Poirier.

“I spoke with Sean [Shelby] and I said, ‘I just wanna fight December. Give me a little time to get used to the baby, and whoever you give me is fine.’ No name yet… I’m definitely interested in the [UFC 269] alternate position… I’m more than ready to go.”

In the other notable lightweight clash set to go down in the final months of the year, top-five contenders Justin Gaethje and Michael Chandler will throw hands on the UFC 268 main card next month. Despite many suggesting the winner of that fight will be next in line for a title shot, Dariush believes his form has him ahead of both in the queue.

“Seven-fight win streak, I guess a bunch of bonuses… and I got like 20 fights in the UFC, people forget. I think I have like 16 wins in the UFC or something. So, I think that puts me a little bit ahead of everybody.

“I’ll probably get somebody to run through, and then either Charles or Dustin, which for me, makes no difference.”

The lightweight title scene will certainly becoming a lot clearer following UFC 268. In what is one of the most stacked cards of the year so far, Chandler and Gaethje’s clash will be joining two blockbuster championship rematches inside Madison Square Garden.

In the main event, UFC Welterweight Champion Kamaru Usman will look to successfully defend his title for the second time against Colby Covington. In the co-main event, Rose Namajunas will make the first defense of her second reign as the strawweight queen. For the second time this year, she’ll meet Zhang Weili inside the Octagon.

Do you think Beneil Dariush deserves a title shot over the winner of Michael Chandler vs. Justin Gaethje? 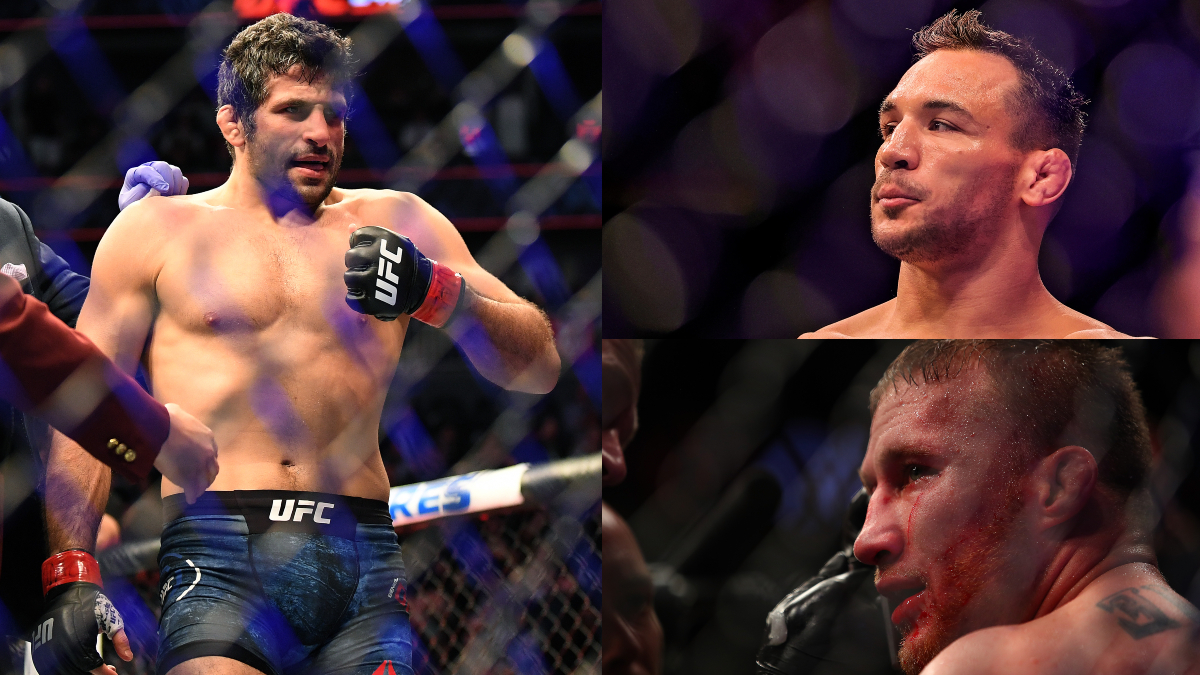