UFC lightweight Beneil Dariush has revealed he wanted to stay active and fight a low-ranked opponent this month rather than wait for a top contender in 2022.

Dariush is currently sitting at #3 in the 155-pound rankings. Having gone 0-2-1 between 2017 and 2018 thanks to losses at the hands of Edson Barboza and Alexander Hernandez, not many would have expected to see the Iranian-born American entering the top five just three years later.

To do so, Dariush had to build an impressive seven-fight winning streak that includes victories over Thiago Moisés, Drew Dober, Diego Ferreira, and Tony Ferguson. After dominating “El Cucuy,” the 32-year-old entered contention and, in the eyes of many, earned a title shot.

With Dustin Poirier set to challenge for Charles Oliveira’s gold this weekend and Justin Gaethje seemingly waiting in the wings for the victor next year, Dariush will need to add another name to his résumé to book an opportunity for the belt. He’ll have the chance to do just that on February 26 when he headlines a UFC Fight Night with surging Dagestani Islam Makhachev.

Dariush’s first walk to the Octagon next year will mark his return after just over nine months away from the cage. After his triumph at UFC 262, the Brazilian Jiu-Jitsu black belt was left high up in a lightweight landscape that didn’t seem to have a place for him at the time.

Speaking to ESPN MMA’s Brett Okamoto, Dariush described his frustration at struggling to find an opponent for the end of 2021 and said he’d always planned on fitting a third appearance into this calendar year.

“It was actually not ideal for me. I was hoping to fight this December. And man, being top five, I didn’t realize how much drama there is, man, what a drama show, dude. So, I told Ali (Abdelaziz) I wanna fight December.”

Dariush also revealed that he’d originally been offered a fight against Makhachev after the 30-year-old’s main event win in July. The UFC wanted to book the pair for a meeting at UFC 267 in Abu Dhabi. With Dariush not ready and the UFC unwilling to keep the matchup together for December, the #3-ranked contender was left without an opponent.

With that in mind, Dariush says he was more than happy to lower his sights to a top-10 or even a top-15 opponent for this month. That request, however, was not approved by his manager Ali Abdelaziz.

“I was still expecting to fight in December. So I’m talking to Ali and Ali’s like, ‘Yeah, we’ll see, we’ll see.’ I mentioned to him like, ‘What if we fight someone top 10 or top 15?’ And he like, freaked out. He’s like, ‘You fire me if you’re gonna do this, like, get outta here.’ And then my wife overhead and she started freaking out and then my coaches (as well)… It’s so much drama. It’s no joke.”

Dariush will finally have the chance to secure a title shot when he faces Makhachev, although he remains slightly concerned about the possibility of Conor McGregor returning straight into a championship fight. But if the UFC is a meritocracy, the winner of February 26’s headliner will have their shot at gold later in 2022.

Do you think Beneil Dariush has what it takes to defeat Islam Makhachev on February 26? 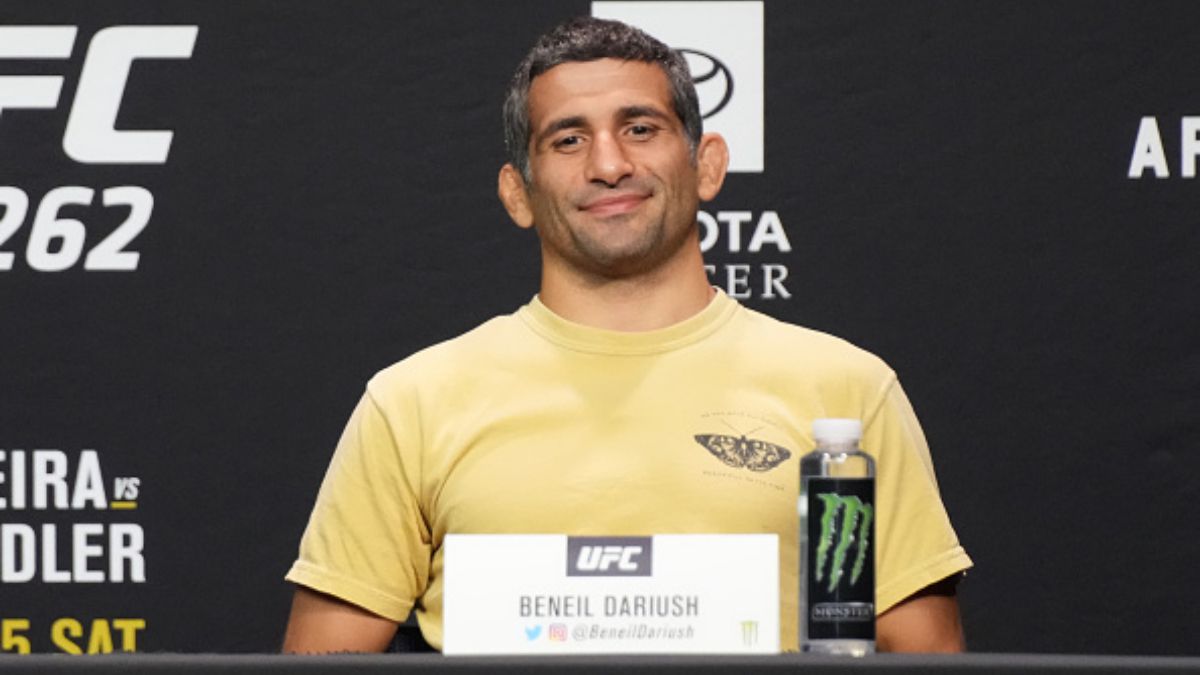