Daniel Cormier Explains Why Money Will Not Entice Khabib To Return
published on December 24, 2020
curated and posted by BRWLRZ Team

Cash is what drives the world, but when it comes to ending Khabib Nurmagomedov’s retirement, it will only lead to a dead end according to close friend Daniel Cormier.

If there is one thing that is stronger than cash, it is passion. Oftentimes it is cash that is at the root of the passion, but in the case of Khabib Nurmagomedov, it is competition. After going 29-0 and reaching #1 on the pound-for-pound rankings, Khabib has already satisfied this passion for competing. So when Dana White meets with Khabib next month to discuss his future, according to Daniel Cormier, money will not be enough to persuade Khabib, who already has enough money to last him the rest of his life.

“I asked Khabib once, I said how much money would it take for me to be rich in Dagestan?” Cormier said in a Q&A session recently. “He said $5 million, and you’re rich for the rest of your life. Khabib has much more than $5 million, so I don’t know how much the money is gonna be the thing that draws him back into the octagon.”

The current lightweight picture does not interest Khabib as the champion has stated in the past. He’s already defeated lightweights ranked #1, #2, and #4, with #2 (Dustin Poirier) and #4 (Conor McGregor) set to face off in what is widely believed to be a #1-contender fight. And the fight that got away in Khabib vs. Ferguson is now a distant memory after Ferguson has now dropped two straight. As for Georges St-Pierre, there have been no rumblings about Pierre making a return to MMA. So with money out the window and the competitive options looking scarce, Dana White is going to have to get creative, Cormier believes.

“Dana’s going to have to tap into something within his spirit to try to get him to fight again,” Cormier said. “He makes so much money outside of the octagon at this point, that it would have to be something that would drive him competitively to come back and fight, because I don’t think it’s gonna be money that makes him go back to the octagon.”

What specific scenario, if any, do you think it would take to get Khabib to return for one more UFC fight? 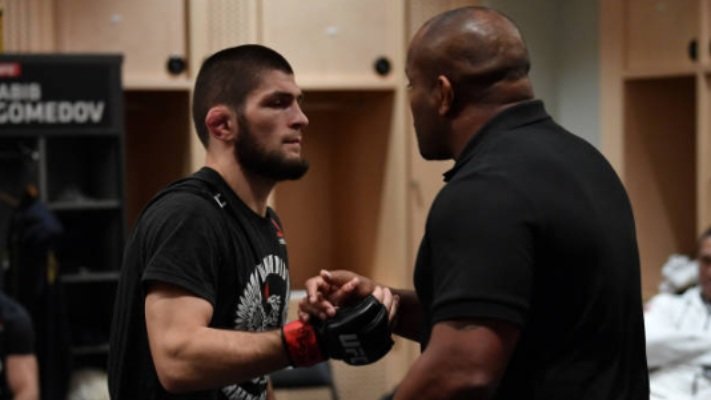