Daniel Cormier believes that longtime training partner and reigning UFC lightweight champion Khabib Nurmagomedov is practically unbeatable and that his final MMA record will reflect that at career’s end.

UFC 254 will close with the best of the best in the lightweight division when Khabib Nurmagomedov puts his lightweight championship on the line against interim champion Justin Gaethje in a unification bout. Justin Gaethje is officially listed as the #1 contender right now in the UFC lightweight rankings, and that number represents something deeper according to Khabib’s American Kickboxing Academy teammate Daniel Cormier. Cormier believes that it signifies the fact that Justin Gaethje is the single biggest threat that there is for the man currently atop the division.

“This is the toughest fight in the division for him. I think Justin Gaethje is an absolute stud… “ Cormier said in a media scrum Tuesday. “The Justin Gaethje that fought Tony Ferguson in May is more dangerous to Khabib than anyone he has ever stood across the Octagon from.

“With that being said, I’ve seen Khabib Nurmagomedov train for championship fights and fights since 2012. The only person that was more thorough in their preparation was Cain Velasquez when he became the champion back in 2010. No one worked harder. No one was more committed. And I just don’t know if anyone’s gonna beat him.”

Cormier believes that Justin Gaethje’s nickname as “The Highlight” is fitting because no one in all of combat sports is more entertaining. He also believes that Gaethje is more than a highlight reel but is a highly talented and lethal kickboxer who has the wrestling pedigree in his back pocket to hold his opponent captive on the feet while he fully deploys his kickboxing tools. But in the end, Cormier cannot see an exception to his belief that no one will alter the 0 in Khabib’s spotless record.

“I’m confident in believing that Khabib will retire undefeated,” Cormier assured. “Nobody will beat this guy. He is too committed to who he’s supposed to be to get beat by anyone.”

Do you agree with Daniel Cormier? Will Khabib Nurmagomedov retire undefeated? If not, will Justin Gaethje be the man to hand him his first loss at UFC 254? 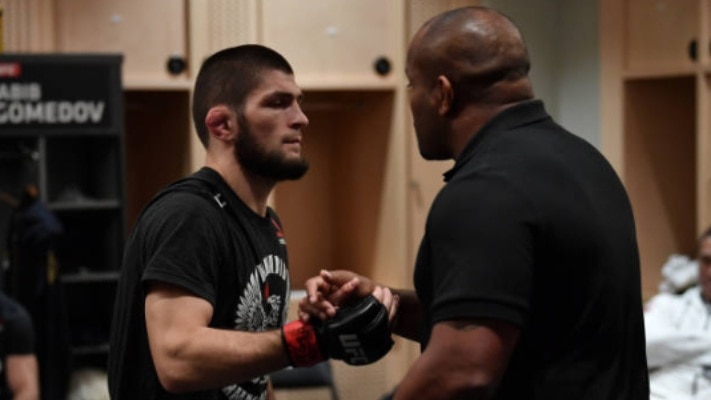