Don’t expect Dana White to throw a wickedly bad first pitch like his UFC superstar Conor McGregor did this week.

Tuesday, Conor McGregor threw out one of if not the single worst first pitches in the history of Major League Baseball prior to a Chicago Cubs home game at Wrigley Field. By now, the majority of active Internet users have either viewed or scrolled by the viral footage, and UFC President Dana White was inevitably among the former group.

White did not partake in the roasting of McGregor for his awful pitch. Instead, he used it as a textbook example of why he has and will continue to refuse to ever suffer the same fate as his cash cow (h/t MMA Mania).

“Let me start here: Do you know how many times I’ve been asked to throw a first-pitch somewhere? And I’ll never do it. Never,” White told the Jim Rome Show on Wednesday. “Just like all those guys who think they can fight, guys think they can throw a baseball to home plate. It’s a lot harder than it looks.

Instead of nearly brawling with rock stars and throwing out historically bad pitches, what White really wants is for McGregor to recuperate from his recent leg surgery. The UFC boss is hopeful for a speedy recovery, and he laid out a key indicator for when that might be.

“This kid needs to heal up,” White said. “I don’t know how fast that leg is going to recovery. It’s basically going to be all about when can he start kicking again and, more importantly, when can he start taking kicks again. That will determine when he fights again.”

How do you think Dana White would do if he was forced to throw out a first pitch? 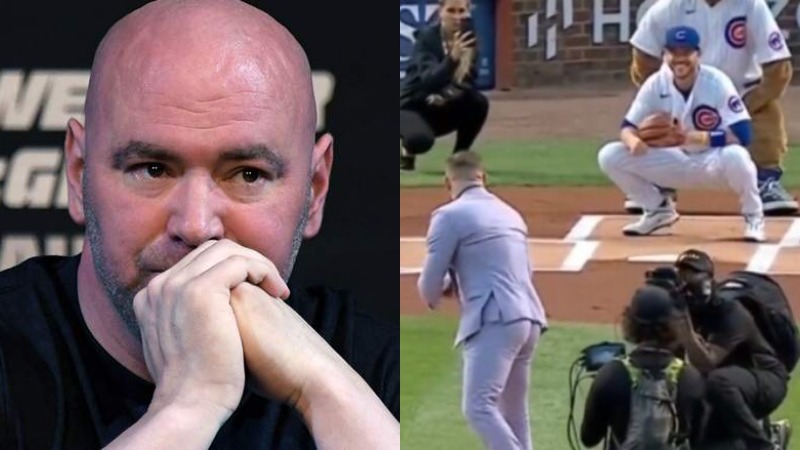