After losing to Jéssica Andrade by TKO in the first round at UFC 266, Cynthia Calvillo has issued her first statement since the defeat.

Inside the T-Mobile Arena in Las Vegas, Calvillo was stopped in the first round due to strikes. The fight started at a breakneck pace and saw the former strawweight champ swarm Calvillo. Unable to withstand the pressure against the cage, Andrade forced the TKO against the 34-year old.

As the curtain-raiser for the main card at UFC 266, the two were responsible for kicking off the show. After the first round finish, Cynthia Calvillo released a statement following the defeat on social media.

“To my family, friends and supporters, I love you and I’m ok. I’ll be back ️Congratulations to @jessicammapro . She is a beast! It was a dream of mine to share the octagon with her and I’m proud of myself for going out there in front of the world. Losing isn’t easy but as they say there’s beauty in the struggle. Highest highs and lowest lows. We live to fight another day!” Cynthia Calvillo posted on Instagram.

The defeat to Andrade marks Calvillo’s second back-to-back loss in the UFC. In addition, this is the 34-year old’s first defeat by TKO in the organization. With a 1-2 record overall in the flyweight division, Calvillo’s only win at 125-pounds was in June of 2020 against Jessica Eye. It will be interesting to see which path Calvillo takes in order to get back on track in the UFC.

Prior to the setbacks, the California native was mentioned briefly about competing for the title at 125-pounds last year. While her title aspirations are suspended for now, adjustments in her striking game will make her return to either weight class much more welcome.

Do you think Cynthia Calvillo needs to change weight classes or stay at 125-pounds? 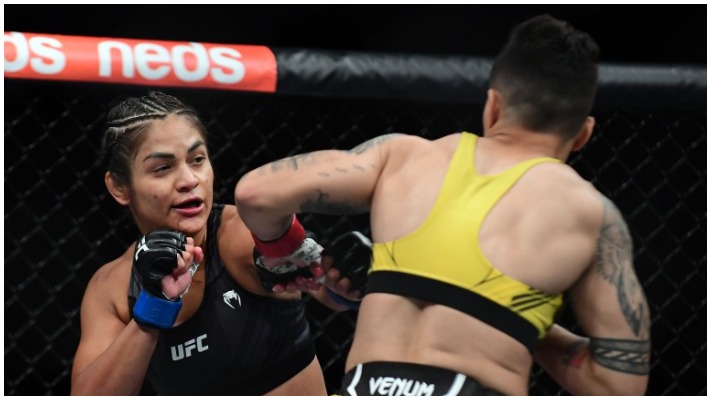