Despite many perceiving it to be the biggest upset in UFC history, Bellator champion Cris Cyborg wasn’t surprised to see Julianna Peña beat Amanda Nunes at UFC 269.

Closing the year in style at 2021’s final pay-per-view, Peña shocked the world inside Las Vegas’ T-Mobile Arena by dethroning the “Lioness.” Ahead of the clash, not many were giving “The Venezuelan Vixen,” who entered the contest off the back of two wins and two losses in her previous four fights, much of a chance.

The general consensus was that Nunes, a dominant two-division champion who hadn’t lost since 2014, was on a 12-fight win streak and had beaten the likes of Valentina Shevchenko, Miesha Tate, Ronda Rousey, and Holly Holm, would shut Peña’s confidence down in emphatic fashion.

Instead, the underdog took the fight to Nunes on the feet before taking the Brazilian down and submitting her in the second round. The debate over whether it’s surpassed upsets like Matt Serra’s win against Georges St-Pierre and Holm’s victory over Rousey will rage on, but it’s certainly up there with the most shocking moments in UFC history.

But one person who was not at all surprised was former UFC Women’s Featherweight Champion Cris Cyborg. The Brazilian, who now competes under the promotional banner of Bellator MMA, knew Peña had what it takes and predicted an upset last weekend.

Speaking about the result in an interview with Combat Sports on Fanatics View, Cyborg explained why she expected “The Venezuelan Vixen” to get the job done on December 11, a feat that Cyborg failed to accomplish herself in 2018.

“You know, I was not surprised. I (picked) Julianna Peña because the five losses for Amanda Nunes, four were the same style as Julianna Peña. And before, we knew Amanda Nunes danger is in the beginning, in the first round. If you pass the first round with her, you can get in the fight. We knew this. Of course, when you fight her, you go fire to fire and that happens, you know, what happened.

“We knew that when she goes past the first round, she sees she cannot finish you, so she’s either gonna run away or quit on the floor or something, and this is what happened for Julianna Peña.”

Despite praising the newly-crowned champ’s ability to bring the fight to Nunes and force her into a position she hadn’t been in since 2014, Cyborg also questioned the fight-ending sequence. According to the 36-year-old, Peña didn’t have a submission locked in when the “Lioness” tapped out. Echoing the thoughts of many, the Bellator featherweight titleholder believes Nunes “quit.”

“I don’t feel like Julianna did any sort of submission because she didn’t have a submission the way she finished the fight. I feel like Amanda Nunes, at one point, she sees she cannot finish, and Julianna Peña continued going forward and she tapped, but (Peña) didn’t have any submission… I don’t know what was passing through her mind in the second round ’cause when you’re gonna fight for the title, you’re ready for seven rounds, and that was the second.

“I feel like Julianna did very good jabs. In the second round, Amanda wanted to finish the fight, to KO her as fast as she can, but Julianna was keeping her on the jab. The jab really opened a lot of doors for Julianna. The reality is when they stopped the fight, I didn’t think they’d finished the fight because she didn’t have a submission there, and I didn’t see the tap, too… I believe Amanda, I don’t know what passed through her mind there, but I believe she quit at that time.”

With Nunes’ reign atop the bantamweight mountain now over, the debate over who is the greatest female mixed martial artist of all time has now been re-ignited.

While the consensus had been that Nunes’ form and prior victory over Cyborg had her ahead, a portion of the MMA community believes the elder Brazilian, whose setback against the “Lioness” is the only blemish on her record since her MMA debut loss in 2005, holds the GOAT title.

Do you agree with Cris Cyborg? Did Amanda Nunes quit at UFC 269? 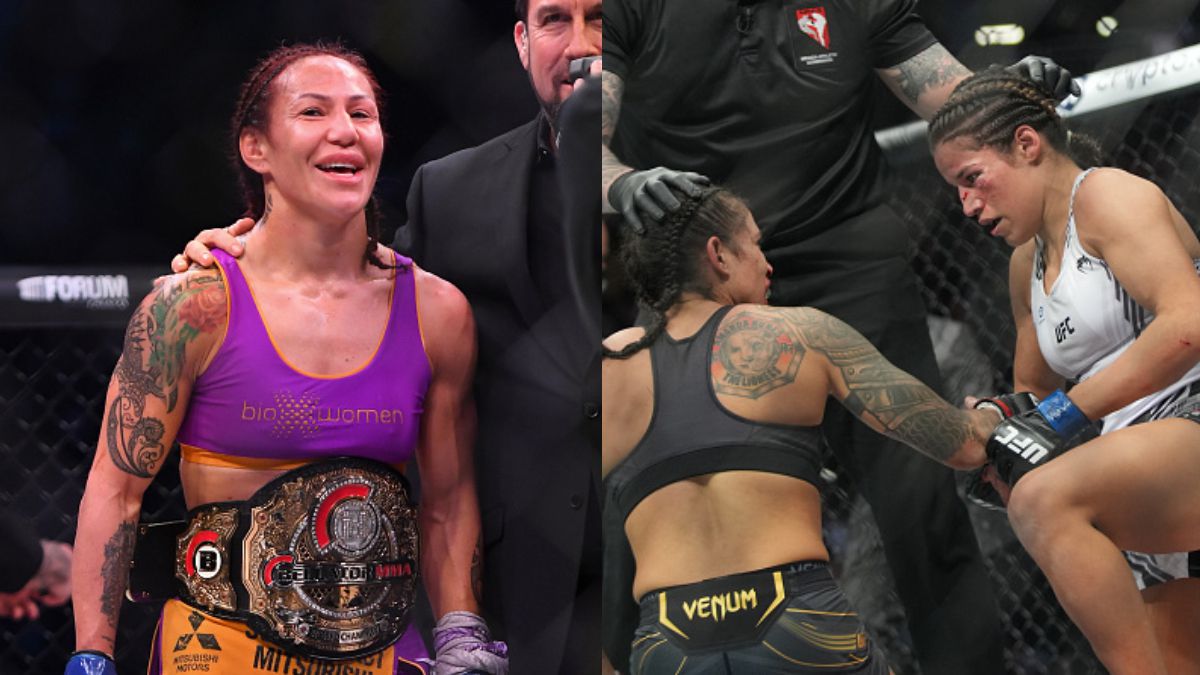