Cormier & Cruz Hash It Out Over Cruz’s Criticisms Of DC’s Commentary
published on December 9, 2021
curated and posted by BRWLRZ Team

Former UFC champions and current broadcast colleagues Daniel Cormier and Dominick Cruz sat down to have an open dialogue about Cruz’s brutally honest and very public feedback about Cormier’s commentating.

This Saturday at UFC 269, Dominick Cruz will be competing against Pedro Munhoz in a high-level bout between two veterans ranked in the bantamweight division’s top 10. But that’s not the story Cruz made headlines for yesterday. Instead, that would be his harsh take on Daniel Cormier’s job performance as a UFC commentator/analyst.

During a media scrum ahead of UFC 269, here is what Cruz had to say about his broadcast partner:

“I watch (Jon) Anik do so much homework leading up to a fight. Like, people have no idea how much homework he has to do to be prepared for that, and the most kudos, for me, goes to him. He leads us in the broadcast with how he talks. When it comes to DC, I usually mute it,” Cruz said with a chuckle.

“I love DC, he’s my friend, but to me, from my experience, he doesn’t do the homework. He wants to get in and out, get the job done, make his money. I think he cares about us, but it’s just different. He doesn’t do the preparation from my experience. He might now. I’m hoping that he watches some film this time, on me, so he knows what I’m doing and why I’m doing it. But I’m not going to hold my breath on that, for sure.”

Soon after Cruz’s comments spread like wildfire throughout the MMA media, Daniel Cormier and Dominick Cruz had a sit-down conversation that was published on Cormier’s YouTube channel. What follows is a full recap of their conversation.

The conversation began with Cormier attempting to nonchalantly have an interview about Cruz’s upcoming fight. Cruz, having already established his frank nature, preferred to skip the formalities and relative small talk and address the elephant in the room. Cormier politely implied that such conversations are better left private, to which Cruz proposed they speak ‘privately in public.’

Cormier disagreed, stating things that are discussed privately should remain behind closed doors. Cruz asked who made that rule and stated that he was merely holding Cormier accountable out of love. Cruz used the analogy of Cormier holding his children accountable if they do something wrong and that it’s all out of love. Cormier replied that it’s only love in Cruz’s mind.

Cormier: What do you hold me accountable for?

Cormier: Dominick, there’s different ways to prepare for a fight than watching film. It’s not singular.

Cormier concluded that because he doesn’t combat Cruz’s opinions, Cruz thinks they must be true. He would then tell Cruz to his face that he violated their trust as colleagues and friends.

Cormier: It’s like, Dominick Cruz, I’ve watched you for years. I’ve watched you. I’ve studied you. But that’s the thing, though, because I don’t combat your opinions, you continue to build on those opinions. And honestly, can I say something? Can I tell you something right now as a friend?

Cormier: It was wrong of you to say what you said this morning.

Cormier: Because it was not fair of you as a colleague to do that publicly. You should tell me. That is a blatant mistrust of friendship and as a colleague.

At this point and to keep things fair, Cruz urged Cormier to give him an honest performance review as well.

Cormier: Because you’re prepared, I think you enjoy the fights, and you love your job.

Cruz pushed Cormier to provide negative feedback as well so that this aspect of their reviews would not be one-sided. Cormier would oblige.

“I think you can be a bit dry,” Cormier offered.

When Cruz disagreed with that assessment, this visibly flabbergasted the former double champion.

At this point, a third man joined the conversation to “mediate,” a fellow colleague and former UFC champion, Michael “The Count” Bisping.

Not long after joining the convo, Bisping told Cruz that he was in the wrong for sharing those thoughts publicly. He also revealed that Cormier used to pay someone to assist him with research, but he stopped this arrangement so that he could process the information himself and also save money.

Cormier was asked to explain more about the researcher, and his testimony did not seem to bolster his case all that much.

Cormier: So I had a researcher that I would pay to give me all my notes, and I would go and call the fights.

Cruz: So how is that watching film?!

Cormier: But then I would watch the fights still, but the guy would give me all the background stuff and all that.

Cruz: Why? That’s your job.

Before Cormier could respond, Bisping interjected and explained on his behalf that he didn’t pay the researcher to do all the research and film study, only some of it.

Towards the end of the conversation, Cruz blamed the media for not providing the full context for his criticism. He also clarified that he never stated Cormier was a bad commentator.

In any event, although Cruz still did not understand why Cormier and Bisping believe his comments would have been better kept private, he did make sure to throw in some positive feedback to his partner as well.

Cruz did not backtrack on his criticisms of Cormier’s research skills, however, and Cormier would ultimately bring the conversation to a close, expressing that things went off the rails.

You can view the full conversation for yourself below. You can also watch Dominick Cruz’s full media day press scrum to judge for yourself if his comments were taken out of context. 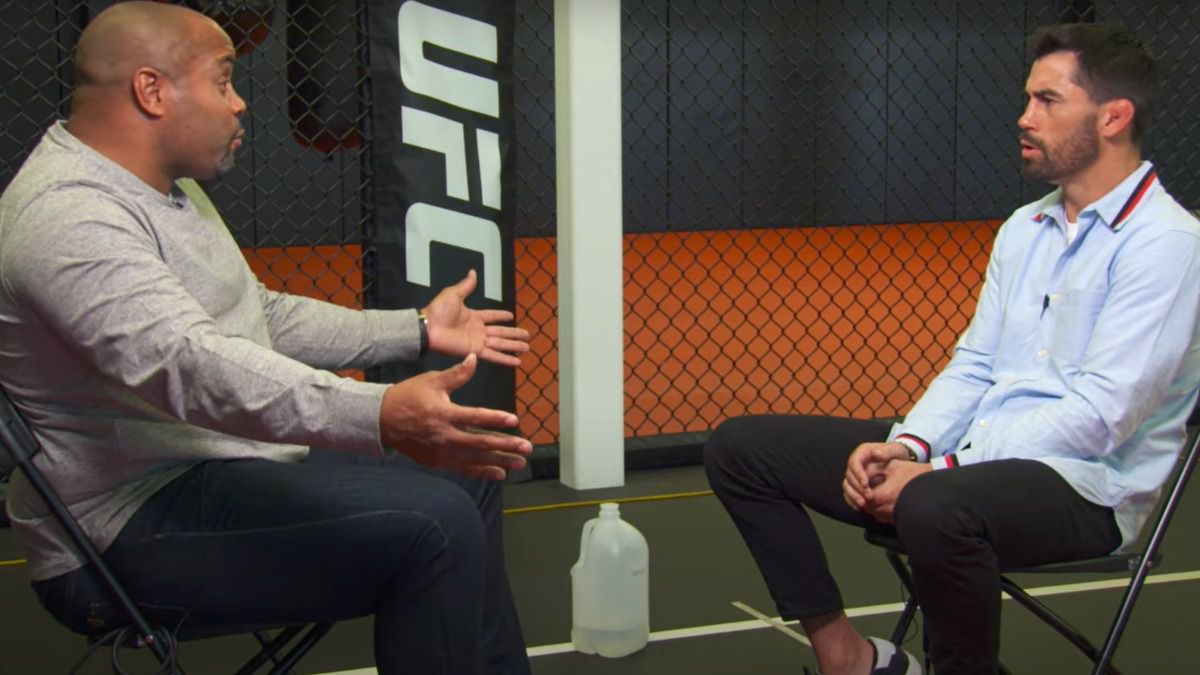