Conor McGregor is back on the offensive on Twitterland, taking aim at Khabib Nurmagomedov and Dagestani culture.

Since 2016, there has been no love lost between Conor McGregor and Khabib Nurmagomedov. At one time, the tension between the two was mostly competitive in nature, but that would all change ahead of their UFC 229 bout two years later.

In the build-up to this event, the two took part in what UFC President Dana White called the darkest press conference in UFC history. During the conference, McGregor took multiple shots at Khabib, including remarks that some considered to be inflammatory against the Islam religion.

After Khabib defeated McGregor at the pay-per-view, all the pent-up rage spilled over into a post-fight brawl initiated by Khabib leaping into the crowd to attack a teammate of McGregor, Dillon Danis. Khabib attributed his loss of temper to McGregor’s pre-fight rhetoric.

In the three years since this record-breaking fight, the animosity between McGregor and Khabib has only escalated. Among the most controversial moments, McGregor called Khabib’s wife a “towel” and made a tongue-in-cheek reference to the death of his father, Abdulmanap Nurmagomedov.

Wednesday, McGregor decided to pass the time by posting a picture of his infamous bus attack in 2018. This is when McGregor and his entourage ambushed the UFC fighter bus in an attempt to get to Khabib.

“Bastrykin! Where is Khabib’s “shit in his pants medal”? He need this for shit his pants 10 rows back,” the tweet reads.

Khabib’s manager, Ali Abdelaziz then got involved, tweeting “You’re drinking again boy. He take your soul but never give it back.”

McGregor then shared a since-deleted screenshot of a Google search that displayed information of Dagestan inbreeding statistics, to which McGregor shared his amusement with a crying laughing emoji.

“Here we go again insulting people nation and religion this is not funny my dream to see you in person,” Abdelaziz wrote.

People of Dagestan some of the best people in the world they are honorable hard worker and have a Lotta integrity something you don’t know nothing about https://t.co/QQYqKjf54Q

“People of Dagestan some of the best people in the world they are honorable hard worker and have a Lotta integrity something you don’t know nothing about,” Abdelaziz continued.

I hate you bro. When you die I celebrate

“I hate you bro. When you die I celebrate,” McGregor wrote to Abdelaziz.

“You mad at Google bro,” McGregor wrote in reference to the data on Dagestan marriages.

Conor McGregor and Dana White both hoped to continue this feud in the Octagon with a rematch of the UFC 229 main event. However, Khabib Nurmagomedov has been retired since his 2020 victory over Justin Gaethje at UFC 254. Thus, McGregor has found consolation in taking heavy shots at Nurmagomedov, and now his birthplace, sporadically on Twitter.

What are your thoughts on these tweets from Conor McGregor aimed at Dagestan culture? 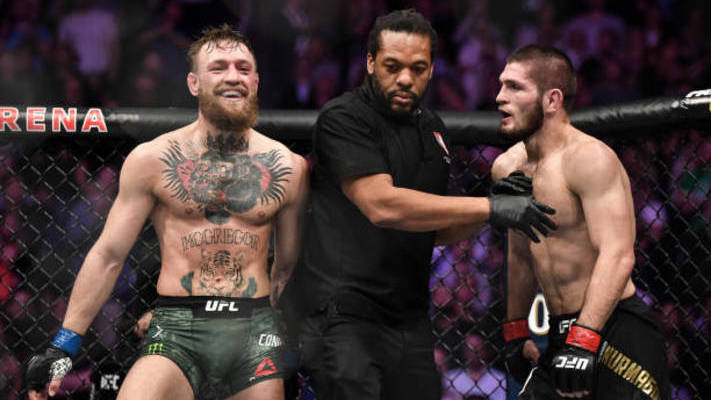