Cody Garbrandt: I Was Not Motivated For Rob Font Main Event
published on December 11, 2021
curated and posted by BRWLRZ Team

Cody Garbrandt is set to make his UFC flyweight debut and that has rejuvenated him of sorts.

Garbrandt, the former UFC bantamweight champ, has been on a bit of a skid as he’s 1-4 since winning the title, with three of the four losses coming by knockout. In his last fight, he fought Rob Font in a Fight Night main event which the former champ says didn’t motivate him. He also says that made him not train and prepare as the way he should’ve for a fight against a skilled opponent in Font.

“This fight, if you’re comparing it to my last fight, I came here and was like, ‘Yeah, I feel good, I feel ready to go,’ but I didn’t prepare the way that I should’ve prepared, you know, for a five-round fight. And that’s the word that I hate to use is motivated. I was not motivated,” Garbrandt said at media day.

“This fight camp I’ve been inspired. I’ve been inspired this whole entire camp because it’s to do something that a few people have done. Yes, I’ve been a world champion, I’m a former world champion in a previous weight division; that’s a small percentage of humans being able to have that title to their name,” Garbrandt continued. “But even a smaller percentage of going to a different division and being a world champion as well, so I’m inspired by myself, but also a lot of people around me, for what’s about to take place Saturday, and that’s just the start of it.”

At UFC 269, Cody Garbrandt is set to face the sixth-ranked flyweight, Kai Kara-France in a very intriguing matchup. Garbrandt has never been the biggest bantamweight and the flyweight move has always been talked about. If all goes well on Saturday night, the next time he fights could be for the flyweight strap.

Do you think Cody Garbrandt will beat Kai Kara-France at UFC 269? 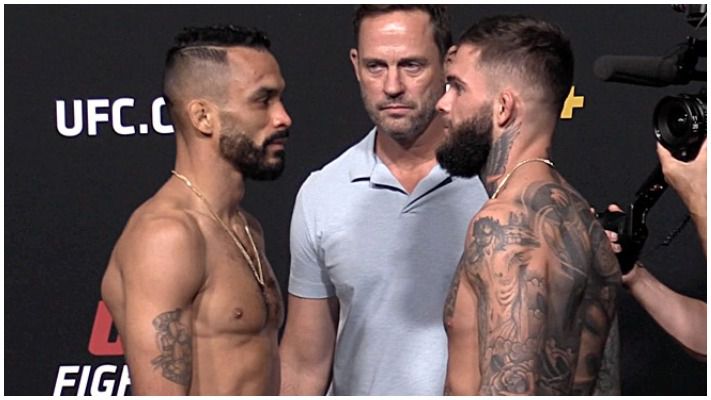