CM Punk Is Certain Conor McGregor Will Cross Over Into Pro Wrestling
published on December 26, 2021
curated and posted by BRWLRZ Team

Pro wrestling legend CM Punk has no doubt that Conor McGregor will be billy strutting into a WWE arena at some point in the future.

If there is one man who knows a thing or two about crossing over into the unknown it’s CM Punk. Punk dared to try his hand at the highest level of MMA in his pro debut five years ago in the UFC. Punk suffered lopsided defeats in both of his professional bouts, but that doesn’t negate the work that was put in behind the scenes to try a new athletic venture.

But when it comes to cross-over athletes, the most recent poster boys for this movement have been the Paul brothers. From high school wrestlers to burgeoning professional boxers, not only has the duo made an athletic crossover themselves but Jake Paul, in particular, has facilitated the crossover of two MMA athletes and counting, with multiple names in the sport vying to join Ben Askren and Tyron Woodley on the YouTuber’s record.

Speaking with ESPN SportsNation recently, Punk credited the Paul brothers’ courage in their commitment to their new careers and name-dropped a couple of other big-named crossover stars past and future, including the biggest star of them all in the MMA world (h/t Cageside Seats).

“A lot of the times — a lot of the sacrifice goes unnoticed. But it’s what it is. When [Floyd] Mayweather crossed over and did a match at WrestleMania, I’m sure we’re eventually going to see [Conor] McGregor come over… [Ronda] Rousey was excellent when she came over. The bottom line is making money. If you’re making money, you’re technically not really doing anything wrong.”

As Punk mentioned, there have been some notable megastars to enter the pro wrestling ring in the past. Floyd Mayweather performed at WrestleMania 24 in 2008, and Ronda Rousey was a full-time performer from 2018-2019. But what stands out in Punk’s quote is his confidence that McGregor will join these ranks.

The idea of Vince McMahon officially passing the billy-strut torch to McGregor in the WWE has been given life by the Irishman himself. In 2019, McGregor stated that he might consider joining the WWE or Hollywood after his UFC career is over.

This year, a few WWE stars have spoken about McGregor in some capacity. Current WWE Raw Women’s Champion Becky Lynch contributed a blazing promo ahead of McGregor’s UFC 264 return in July. WWE legend John Cena also stated that he thought McGregor was tailor-made for the company. However, the reigning WWE Champion Big E cautioned that not everyone would be welcoming if the Irishman made the leap to sports entertainment.

CM Punk’s MMA crossover run officially ended when he made his pro wrestling return by signing with All Elite Wrestling in August. If Mystic Punk’s prediction rings true, McGregor’s crossover has yet to begin but is inevitable.

How do you think Conor McGregor would fit in the WWE? 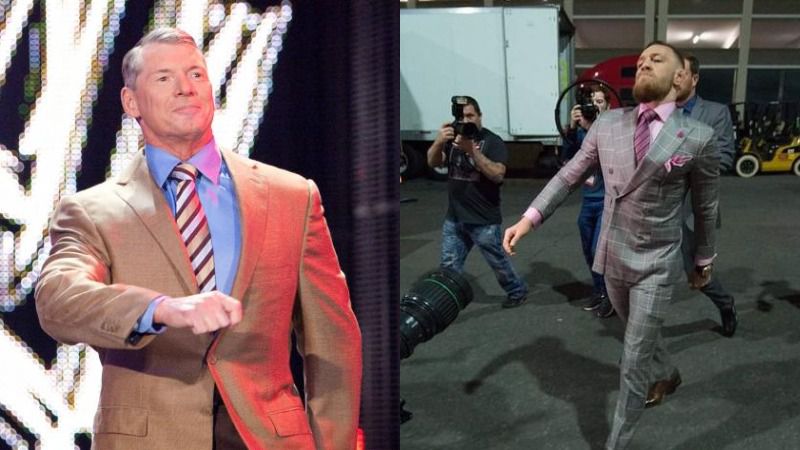