Chris Weidman: I Can 100% See The UFC Letting Me Go
published on December 24, 2020
curated and posted by BRWLRZ Team

Former UFC middleweight champion Chris Weidman would not be surprised if the UFC released him from his contract if he doesn’t prove he’s still a title contender.

Chris Weidman is a former UFC middleweight champion and is still ranked just outside the top 10 despite having some ups and downs in recent years. Weidman is coming off a victory in his latest bout over Omari Akhmedov, and with Dana White announcing there will mass roster cuts on the way, Yoel Romero being a notable casualty, Weidman realizes that he will need to continue winning or he might be considered expendable as well.

“I’m not really worried about it, but I wouldn’t be surprised,” Weidman told MMA reporter James Lynch recently. “There’s nothing that surprises me. I don’t think I’m more special than anybody to where they’re just gonna go like, ‘Oh, Chris Weidman’s a guy we’re just going to keep forever no matter what.’ If I don’t prove I am a world class fighter and prove that I’m still title challenger ready, then yeah, I can 100 percent see that.”

Chris Weidman believes that the roster cuts will be based on financial decisions as much as anything else. After all, the salary for an up-and-coming talent usually pales in comparison to that of a former champion or a veteran who is currently competing under a more lucrative deal.

“It’s unprecedented that they’re letting guys go with fights on their contract,” Weidman said. “It really does put everybody in a position if you’re in the UFC like, ‘Oh crap.’ If you’re not winning right now, especially if you’re getting paid a lot of money, it looks like they’re trying to get rid of you and bring these younger guys up who they’re not paying as much money. It seems like they’re kind of focused on that.”

Chris Weidman is currently ranked #11 in the welterweight division. He does not currently have a fight booked.

Would you be surprised if the UFC released Chris Weidman in 2021? 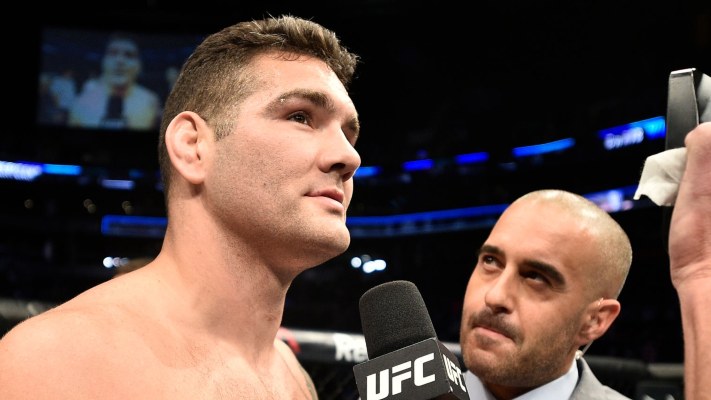