Cheyanne Buys Steps In To Fight Mallory Martin With Montserrat Ruiz Out
published on November 18, 2021
curated and posted by BRWLRZ Team

Cheyanne Buys will be taking a short-notice fight.

Buys was supposed to fight at UFC Vegas 43 this Saturday against Loma Lookboonmee. However, she tested positive for COVID-19 over a week ago which forced her out of the fight. Now, according to MMAFighting, Buys will be stepping up at UFC Vegas 44 on December 4 opposite Mallory Martin. Martin was originally supposed to fight Montserrat Ruiz who had to pull out due to undisclosed reasons.

Cheyanne Buys (6-2) picked up her first UFC win in a big way back in July as she scored a head kick KO win over Gloria de Paula. In her debut, she suffered a decision loss to Ruiz back in March. The 26-year-old earned her way into the UFC with a hard-fought decision win over Hilarie Rose on the Contender Series.

Mallory Martin (7-4) is coming off a first-round submission loss to Polyana Viana at UFC 258 in February. Prior to that, the 27-year-old submitted Hannah Cifers in the second round in August of 2020. Martin is 1-2 in the UFC with her loss coming by submission to Virna Jandiroba. She competed on the Contender Series in 2019 but didn’t get a contract, but after one more win in LFA she got the UFC call. She also fought in Invicta FC on the regional scene and in her third pro fight, fought and lost to current UFC flyweight, Maycee Barber.

With the addition of Cheyanne Buys vs. Mallory Martin at UFC Vegas 44 on Dec. 4, the fight card is as follows:

Who do you think will win, Cheyanne Buys or Mallory Martin? 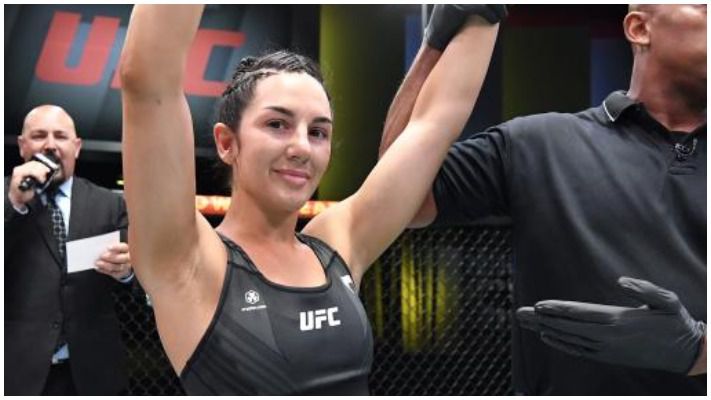