Chandler: I Don’t Need To Get Oliveira Loss Back
published on November 6, 2021
curated and posted by BRWLRZ Team

UFC lightweight contender Michael Chandler has suggested he has no burning desire to exact revenge on current champion Charles Oliveira.

After less than a year in the UFC and just one Octagon outing, Chandler found himself fighting for the 155-pound title in just his second appearance. After serving as backup for the UFC 254 main event between Khabib Nurmagomedov and Justin Gaethje last October, the former three-time Bellator champ made his much-awaited debut on Fight Island in January this year.

In what most thought would be a difficult first test, Chandler breezed past top-10 contender Dan Hooker with a first-round TKO at UFC 257. After Khabib retired and vacated the gold, and Dustin Poirier favored a third fight with McGregor over the title, “Iron” found himself battling promotional veteran Charles Oliveira for the belt.

Despite coming inches away from championship glory in the opening round, Chandler saw his title hopes slip away in the second. After a mighty comeback, “Do Bronx” secured a TKO and left Houston’s Toyota Center as the new lightweight king.

Chandler Has No Desire For Revenge

Having suffered defeat after coming so close to title glory, Chandler certainly would’ve been forgiven for neglecting media appearances and taking some time to himself. Instead, the #4-ranked 155-pound star broke his loss down on a podcast just days later, and continues to maintain a positive attitude towards his one and only setback in the promotion.

In line with that, Chandler recently claimed he doesn’t feel the need to get the Oliveira fight back and right his UFC 262 wrong. During an interview with MMA Fighting, the 35-year-old said that whilst he’s happy to face “Do Bronx” again for the title, he won’t actively pursue a rematch unless gold is involved.

“Honestly, for me, I never want to get one back, you know. To me, as a man, I look at the sport, whether it’s this sport or any other sport, that it’s just competition and the names and the faces don’t really matter. It’s a guy with two arms and two legs, and he was gonna compete against me that night and he got the better of me, Charles Oliveira did, or there’s been 20 something other times in my career that I’ve got the better of other guys. It’s never, for me, been about getting anything back. I’ve lost numerous times in my career, none of those I need to get back or want to get back.

“Obviously, when I beat Justin Gaethje and Charles Oliveira fights Poirier, if he wins, of course there’s an extra added incentive, not to just go and fight for the UFC title again, win the UFC title, but to beat the guy who took it from me the first time, or took that opportunity from me… that would definitely be some icing on that cake. But it’s never been about the opponent for me. It’s always been about myself.”

Whether against Oliveira or Poirier, who are set to square off for the lightweight title at UFC 269 next month, Chandler could well be fighting for UFC gold again in 2022 if he’s victorious this weekend. Continuing his trend of only competing against the best in the promotion, “Iron” will open the UFC 268 main card on Saturday against former interim champ Justin Gaethje.

Who do you think will have their hand raised at UFC 268, Michael Chandler or Justin Gaethje? 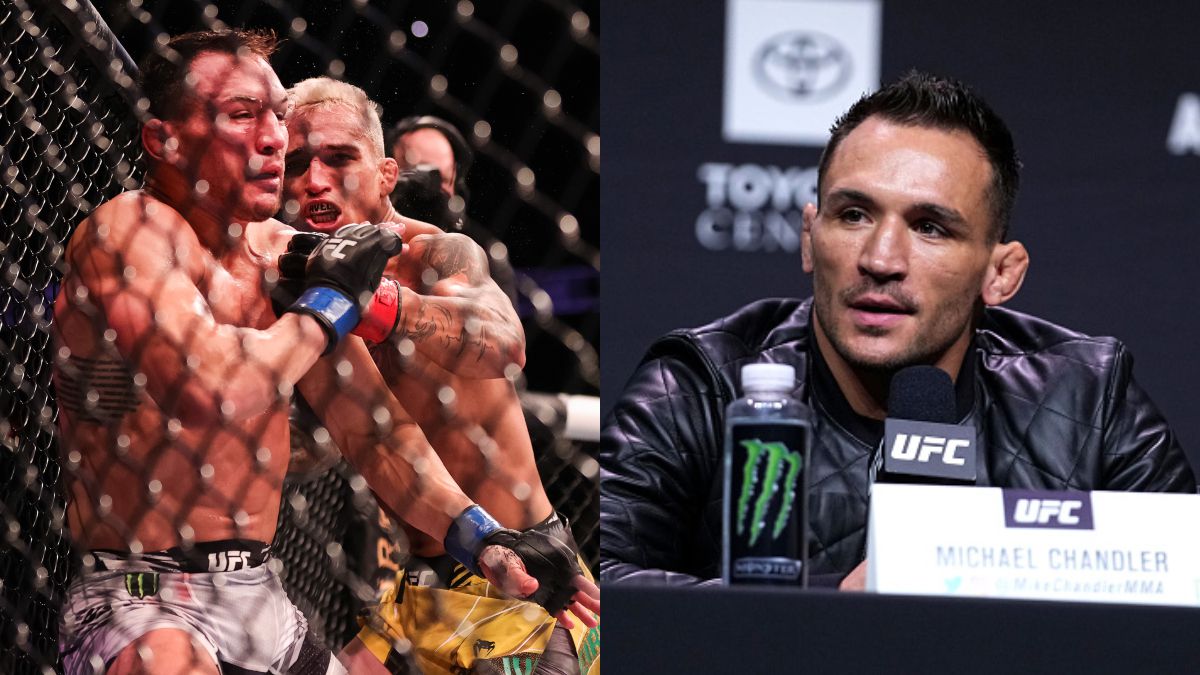