Bisping: Khabib Took Himself Out Of GOAT Conversation, GSP Is #1
published on October 5, 2021
curated and posted by BRWLRZ Team

Khabib, who is widely considered the greatest lightweight of all time, announced his retirement at UFC 254 last year. After submitting the then-interim champ Justin Gaethje in the second round, “The Eagle” called time on his career. Khabib departed the sport with a perfect 29-0 professional record.

Having beaten names like Rafael dos Anjos, Michael Johnson, and Edson Barboza, Khabib fought Al Iaquinta for the 155-pound gold in 2018. After securing his place at the division’s mountaintop, the Dagestani sensation defended his throne against three of the best lightweights in recent memory, Conor McGregor, Dustin Poirier, and Gaethje.

While many have at the top of their GOAT list, former UFC Middleweight Champion Michael Bisping couldn’t find a place for him in his top-three. Speaking on episode four of True Geordie’s The Pain Game, “The Count” suggested Khabib took himself out of the conversation by retiring so soon.

“Yeah, he took himself out of it. And if you look, yeah, he didn’t fight the best until the end of his career. When you compare that with GSP or (Jon) Jones or Anderson (Silva), their run against world-class competition was far longer. But for Khabib, I know it was because of his father passing away, and he made a promise to his mother. So, it’s different circumstances.” (h/t Sportskeeda)

Despite the Russian’s undefeated record, Bisping doesn’t believe it compares to those of Georges St-Pierre, Jon Jones, and Anderson Silva.

“But for those reasons, I think when you look at the resumes, even though he was undefeated, the resumes don’t really stack up. And I say that with tremendous respect to Khabib. Far be it for me to downplay his career because I would never dream of doing that.”

Discussing the three names he did include in his GOAT conversation, Bisping suggested that St-Pierre may have the edge due to Jones and Silva’s positive drug tests.

“If it wasn’t for Jon Jones’ (positive drug tests), I think he would be there, but the fact that he did test positive is a black mark, and same with Anderson. Anderson was incredible, he was the man…but, there’s a few asterisks next to him as well. So , I guess, I guess, I mean, you could say Georges St-Pierre…he’s definitely up there, and, of course, if I’m gonna get beat off someone, if someone’s gonna take my belt, it might as well be the greatest of all fucking time.”

Last month, St-Pierre was inducted into the UFC Hall of Fame at the delayed 2020 ceremony. “Rush,” who was a two-division champion in the promotion, last competed in 2017. Having become a two-time welterweight king and defended the 170-pound title eight times, the Canadian vacated his belt and took a four-year hiatus from MMA.

St-Pierre returned at UFC 217 and challenged Bisping for the UFC Middleweight Championship. In the third round, GSP submitted the Englishman with a rear-naked choke. After becoming just the fourth person in UFC history to become a champion in multiple divisions, “Rush” quickly vacated his belt due to injury, and retired from active competition in 2019.

Who makes the top-three of your GOAT list? Does Khabib Nurmagomedov make the cut? 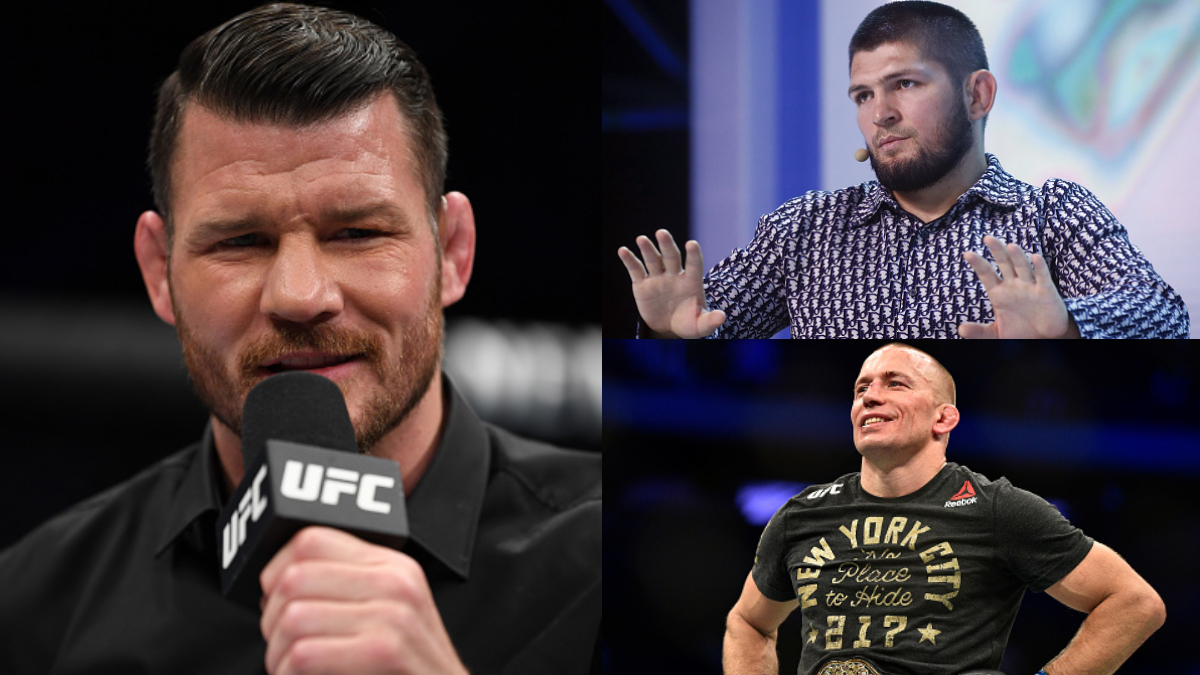