Bisping: If I Was Matchmaker, I’d Book Zhang vs. Jędrzejczyk 2
published on November 17, 2021
curated and posted by BRWLRZ Team

Weili was in action earlier this month at UFC 268. In the Madison Square Garden-held pay-per-view’s co-main event, “Magnum” looked to regain the 115-pound gold having lost it seven months prior. However, in her second meeting in the Octagon with Rose Namajunas this year, Weili once again came up short.

When the pair first collided inside the VyStar Veterans Memorial Arena at UFC 261, the Chinese star, who was on a 21-fight winning streak at the time, was knocked out for the first time in her career. Having decimated Jéssica Andrade to win the title, and taken the bests shots Jędrzejczyk had to offer in her first defense, many expected Weili to move past Namajunas. Instead, a left head kick sent her to the ground and meant she left Florida without the championship.

After being granted an immediate rematch, Weili switched up her hairstyle and training ahead of UFC 268. But in a tight and competitive affair, “Magnum” fell on the wrong side of a split decision on November 6.

Despite back-to-back losses, many believed Weili did enough to earn the nod on the scorecards at MSG, and her form prior to 2021 means she won’t have fallen too far from contention. In fact, it’s likely one impressive victory over a top contender will see her fight for gold again.

While Carla Esparza is clearly the frontrunner for the next title shot, something Namajunas believes to be the case, Marina Rodriguez has also established herself as a challenge to the strawweight throne. Despite the Brazilian’s surge up the ladder, UFC Hall of Famer Bisping has another opponent in mind for Weili’s next outing.

Speaking in a video uploaded to his YouTube channel, “The Count” suggested the former champion should run back her Fight of the Year clash with Poland’s Joanna Jędrzejczyk.

“If Zhang gets another shot, she’s gonna have to earn it. Unfortunately, there’s some tough people out there. When I say tough people, I’m talking about Joanna Jędrzejczyk, right, because everyone wants to see that rematch. Zhang wants to fight for the belt again, no doubt about it, she’s a tough competitor… but to do that, she needs to win some more fights.

“I mean, I don’t know, I’m not the matchmaker, it’s not my job. But if I was Dana White, Sean Shelby, or Mick Maynard, I’m saying, ‘Okay, the next fight for Zhang Weili is pretty easy (to decide); Joanna Jędrzejczyk.’ That first fight was Fight of the Year. Both ladies just didn’t give a shit did they. They beat the crap out of each other. Just stood there for five rounds and just went mental. It was insane.”

In a back-and-forth five-round war at UFC 248, Weili and Jędrzejczyk threw everything they had at each other. Since falling short of victory, and sustaining a brutal-looking hematoma in the process, the Pole hasn’t returned to action. She was even recently removed from the rankings.

Discussing Jędrzejczyk’s desire to fight for gold and to receive a bigger piece of the UFC’s financial cake, Bisping suggested she can achieve both goals by entering the Octagon with Weili for the second time.

“They’ve gotta make that fight again. That was the Fight of the Year, and now they’re both in a position where they wanna fight for the belt. Joanna Jędrzejczyk came out and said she only wants to fight in title fights… How does she get fast-tracked to the belt? How does she get back to the table to stuff that cake in her face? Well, she goes through Zhang Weili. She beats Zhang Weili, boom, there it is.”

Would you like to see Zhang Weili vs. Joanna Jędrzejczyk 2? 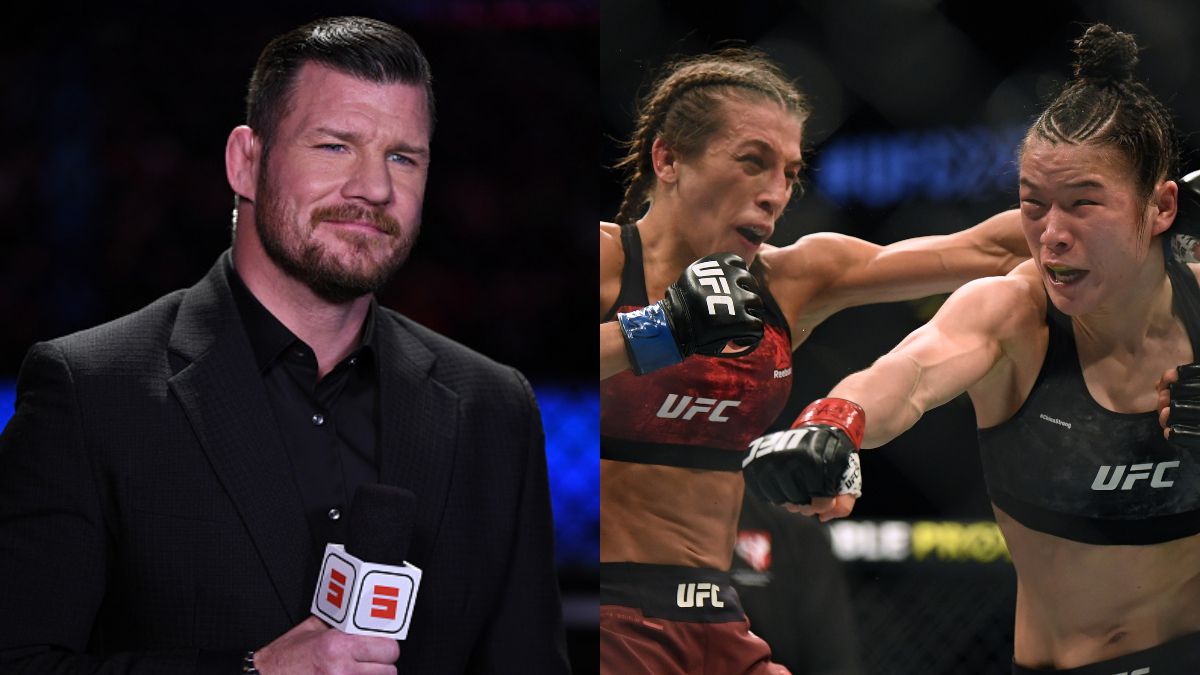