Beneil Dariush: The UFC Offered Me Makhachev Matchup For UFC 267
published on December 2, 2021
curated and posted by BRWLRZ Team

UFC lightweight contender Beneil Dariush has revealed that the UFC had hoped to book his matchup with Islam Makhachev for this year.

Dariush’s rise towards the top of the 155-pound ladder has certainly been memorable. Since losses to Edson Barboza and Alexander Hernandez, the 32-year-old has built a seven-fight winning streak, which includes submission wins against Drew Dober and Frank Camacho, highlight-reel knockouts of Drakkar Klose and Scott Holtzman, and a display of total dominance against former interim champion Tony Ferguson.

Now ranked #3 in the division and seemingly just one step from a meeting in the Octagon with the champion, Dariush will look to secure his first title shot when he faces Makhachev. The pair are set to collide in the main event of a UFC Fight Night on February 26.

A Fight Months In The Making

Despite the booking being targeted for the second month of 2022, Dariush has revealed that the promotion’s original plan was for the two top-five contenders to meet in Abu Dhabi at UFC 267.

During an appearance on DC & RC, the Iranian-born American told Daniel Cormier that he was unable to make the Abu-Dhabi-held event due to the birth of his child. While he’d initially hoped to push the matchup back to December, the UFC were keen to have Makhachev appear on Fight Island.

“Man, I’m stoked. Big respect to Islam and Khabib and that team, they’re one of the best teams right now in the game. It was kinda hard getting this matchup because obviously, our manager (Ali Abdelaziz) was like, ‘You guys are the best in the division, I want you guys fighting for the title,’ and also, the timing for the last fight, for Islam, he needed to do Abu Dhabi, and I just had a baby, so I couldn’t do Abu Dhabi. I told them I could do December, and they said no, he had to be there. So it was a little bit tricky, but I’m stoked for this fight man. Islam is so good. He’s one of the best guys, if not the best.”

When questioned on the failed plans, Dariush revealed that UFC President Dana White had proposed the fight with Makhachev after the surging Dagestani submitted Thiago Moisés in the main event of UFC Vegas 31 in July.

“Remember when Islam fought Thiago Moisés? Dana said, ‘Hey, I want him to fight Dariush.’ And I was like, ‘Man, if we could do December, that makes perfect sense for me. Let’s go.’ And I found out that Islam had to do October 30 for Abu Dhabi because he has such a big fanbase and they love him over there and they had to have him over there, which I was like, ‘Alright, I understand but like, I just had a baby, I have no clue what I’m doing.’”

In the end, Makhachev faced Dan Hooker at UFC 267 after original opponent Rafael dos Anjos withdrew through injury. With a brutal first-round kimura, the 30-yar-old burst into title contention and eventually set up a clash with the equally in-form Dariush.

How do you think the fight between Beneil Dariush and Islam Makhachev will play out? 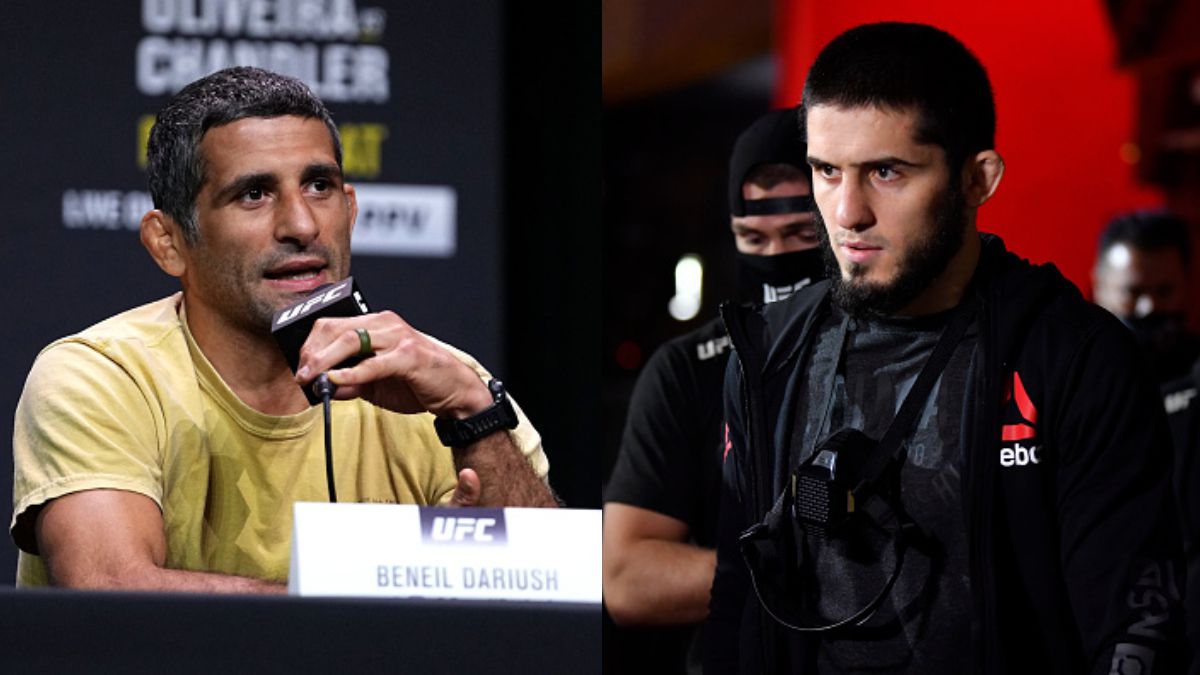