Atlas Doubts if White’s Criticizers Would Have Acted Different At UFC 270
published on January 28, 2022
curated and posted by BRWLRZ Team

Renowned boxing trainer Teddy Atlas has questioned whether those slamming UFC President Dana White for not putting the title on Francis Ngannou at UFC 270 or attending the post-fight press conference would have acted differently if they were in his shoes.

At the opening pay-per-view of 2022, Ngannou made a statement. Not only was “The Predator” regarded as the underdog heading into his unification showdown with Ciryl Gane, but he also carried a torn MCL and damaged ACL into the contest, as well as the cloud of his ongoing contractual dispute with the UFC looming overhead.

After losing the opening two rounds and struggling to get close to “Bon Gamin” on the feet, it appeared Ngannou was set to lose multiple things, including his belt, a strong negotiating position with the UFC, and the hope of crossing over to boxing to face heavyweight stars like Tyson Fury and Deontay Wilder.

But in the 15 minutes after the start of round three, Ngannou turned things around with a revitalized strategy. Incorporating a much-improved wrestling game into the main event, described by cornerman Kamaru Usman as the “evolution” of the heavyweights, the Cameroonian took frames three, four, and five to walk away with a unanimous decision verdict and, in the context of the clash, a whole lot more.

The story after Ngannou’s victory was always going to surround what the result meant for his future in the UFC and the future of the heavyweight title. However, that story was majorly fueled by Dana White’s absence, both inside the Octagon at the culmination of the headliner and at the post-fight press conference.

From fans to pundits, the UFC President has been widely criticized for his unique decision not to put the belt around the champ’s waist following the opening PPV main event of the year. However, one prominent combat sports personality sees things differently.

During a recent episode of The Fight with Teddy Atlas, American boxing trainer and fight commentator Atlas came to the defense of the UFC kingpin.

Ultimately, the 65-year-old reminded the criticizers that White runs a multibillion-dollar business. With that in mind, Atlas believes he has to be able to look beyond Ngannou and is smart enough to recognize when he’s being challenged.

“Francis and his manager, I give them all the credit in the world, they pulled it off. They took a risk, they stood up against the boss in some ways, they made their position noted, and went out and did what they had to do,” added Atlas. “Dana knows, he didn’t sell something and build something up to $4.2 billion by being stupid. He understood where he was being challenged.”

Nevertheless, Atlas did acknowledge that White’s post-fight actions weren’t a good look. But even so, the New York native doubts those slamming White’s absence after UFC 270 would have acted any differently if they were in the same position.

“You have to respect both sides. Dana, at that point, a lot of people say that it’s a bad look, that it’s not professional, it wasn’t right, and I got it, I can understand you saying that, I can,” continued Atlas. “But please don’t tell me, even if you didn’t like it, if you were in the same position 100% you would’ve done different. Maybe you would’ve? But maybe you wouldn’t have when it comes down to the backdrop that you are the boss, you do have to be ready for what’s coming down the pipe after Francis Ngannou, and what you believe in and how you hold yourself; the position that you take and the strength of your position.”

While he certainly sees both sides of the coin, Atlas concluded with a query: would Dana White have built a company with the size and success of the UFC if he was capable of always being a gentleman?

“He’s got a little bit more going on than just the simplicity of just being a gentleman that we want him to be. I understand both sides… I’ll leave it with this, maybe if he was capable of doing that, which is a nice dimension, maybe he wouldn’t be capable of getting $4.2 billion for the company,” concluded Atlas.

White says that he walked out of the arena right after the co-main event because there was something going on backstage that he was dealing with.

White calls the people that think he was disrespecting Ngannou “idiots”.

While the debate is ongoing, White sees it as a non-issue. During an ESPN+ fan Q&A on Wednesday, the 52-year-old addressed the criticism he’s received since last weekend’s main event.

He said his absence was simply due to other factors demanding his attention backstage at the time and branded those who saw it as disrespectful to Ngannou as “idiots.”

Do you think Dana White had a valid reason for not putting the belt on Francis Ngannou or attending the post-fight presser? 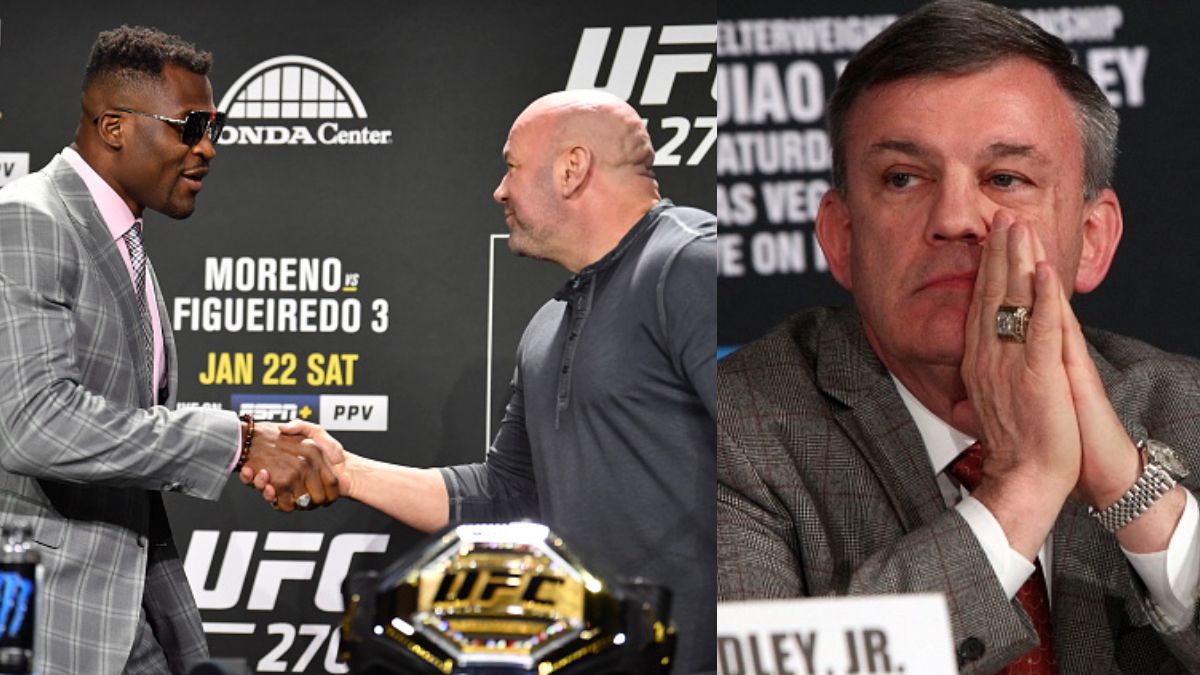