Aspen Ladd‘s Coach has fired back at Miesha Tate after she called Ladd a cheater.

Following her difficult weight cut and coming in several pounds over for her UFC Vegas 38 bout, Aspen Ladd has received some criticism. Former champion Miesha Tate threw some shade Ladd’s way following her removal from the fight card. Tate stated that she through Ladd was trying to cheat. Now following that accusation, Ladd’s coach and boyfriend Jim West has responded to Tate in a since-deleted tweet.

“Miesha Tate you are a coward,” West wrote. “Remember when you lied saying we wanted you to fight late notice at 145 but you went on record saying we wanted it at 135 and we know for a fact you said you didn’t want that tough of an opponent? Trust me have good inside information.”

Ladd originally weighed in at 147 pounds with clothes on. The officials had her strip down and hold her hands up after Ladd was shaking and unable to stand still. Tate thinks Ladd was holding on to the cloth of the ring used to hide a fighter while on the scale.

Please try and stand still, with hands in the air while dehydrated, dizzy, and nauseous all while trying to hold yourself because you are bleeding. You better hope you never have to fight Aspen. Oh wait you probably won’t you coward

Ladd has had a long history of weight-cutting problems. She has missed weight in the past and often looks very weak on the scale. Despite these issues, Ladd has only lost one fight in her professional career. She is currently ranked number three in the bantamweight rankings. She was close to a title shot, but now following these issues, her future in the UFC is unclear.

Prior to the weigh-ins, Ladd was actually looking for a fight with Tate. Tate has recently returned to the UFC following a brief retirement. Ladd has proposed the two meet inside the cage, now that a feud has risen it could be interesting to see if these two fighters can agree to fight.

Do you think Aspen Ladd and Miesha Tate will fight each other now that they have some beef? 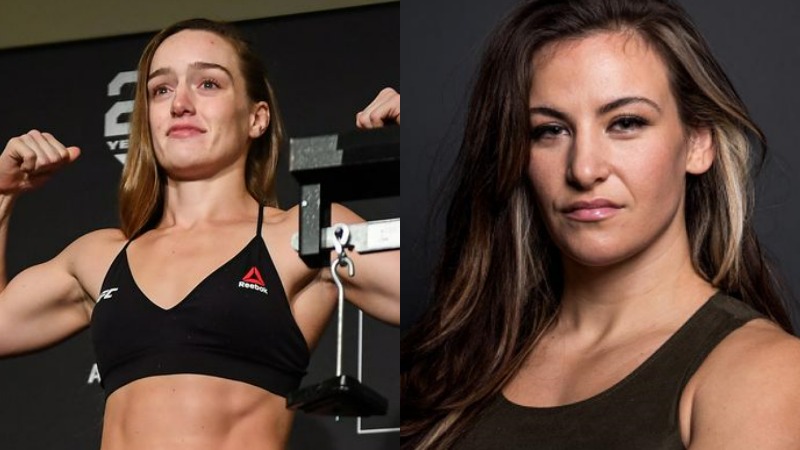