Aspen Ladd Is Heading Back To Bantamweight, Wants Miesha Tate Next
published on December 2, 2021
curated and posted by BRWLRZ Team

Aspen Ladd has her sights set on a return to bantamweight.

The past few months have been a bit drama-filled for UFC‘s Aspen Ladd. She missed weight, made weight in another division, made some enemies, and lost a fight. Now, she is in the process of getting herself back on track and she has a good idea of where she would like to head next, back to bantamweight and against Miesha Tate.

Ladd confirmed to MMA Junkie that she will “definitely” be returning to the bantamweight division. Her last bout was a one-off at featherweight against Norma Dumont in October. She lost that bout just a week after she missed weight for her originally scheduled bout against Macy Chiasson.

One of the loudest critics when she missed weight was the former champion, Miesha Tate. Tate also spoke on the harsh cornering Ladd received from her coach, Jim West. Tate stated that she knows from personal experience the problems that could arise from a fighter and coach dating.

“I think she’s definitely stirred the pot quite a bit,” Ladd said of Tate. “We all have life experiences, right? But without knowing what’s happened to another person, you can’t just apply, like, your triggers and what’s wrong with you to them. She has a tendency to see the world through what’s happened to her in the past.”

Tate spoke out on Ladd’s professionalism on the scale. Tate accused Ladd of cheating and began a Twitter feud with her and her coach. Even before the arguments, Ladd was persuing a bout against Tate. These comments have now just solidified her desire to take on Tate.

“I don’t want to talk sh-t, but I definitely want that fight,” Ladd said. “You said some things; let’s go handle this like adults here.”

Tate is coming off a loss to Ketlen Vieira on Nov. 20. This was the first loss suffered by Tate since returning to the UFC following the birth of her children and a brief retirement. Tate is currently sitting in the #7 spot of the official bantamweight rankings. With Ladd at number four, it could be a fight that Tate is willing to take.

Do you want to see Ladd and Tate settle their beef inside the Octagon? 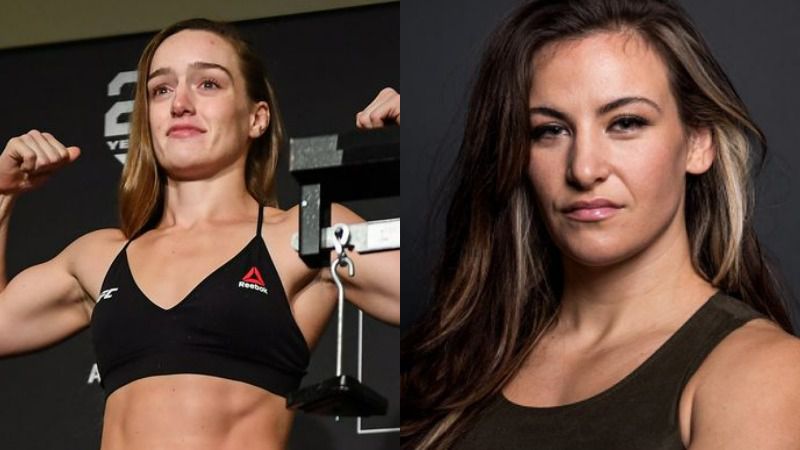