(Archives) White On Jones’ Rehab Story: The Truth Will Come Out (2015)
published on January 16, 2022
curated and posted by BRWLRZ Team

On This Day Seven Years Ago…

Although Jon Jones’ mother, Camille Jones, claimed that her son checked himself out of rehab after only one day, UFC President Dana White says that is “not necessarily the case.”

White spoke with the Boston Herald this week about the highly publicized story of Jones’ positive test for cocaine and subsequent rehab stint, indicating that there’s more to the story than people might think.

White and the UFC have taken some pretty heavy criticism themselves regarding the matter, as many questioned how a failed drug test on December 4th did nothing to prevent a fight between Jones and Daniel Cormier taking place a month later at UFC 182, and how Jones has ultimately seen zero consequences despite the fact that he consumed illegal drugs.

White was quick to point out that although it’s a serious situation, legally speaking, he and the UFC’s hands were tied.

“You can bust guys, you can fine guys, but I can’t pull him out of a fight,” said White. “That thing will be in a lawsuit in 3.5 seconds and I’ll lose. So then we don’t have a fight and I’ve still got to pay the money.”

The UFC boss continued, “When you start talking about cocaine and some of these other drugs, that’s hardcore stuff, man, and that’s when people need help. So I want to know that. I wish I could know what everybody was doing, but you can’t police 567 guys year-round.”

Jones is rumored to be attending the NFL’s AFC Championship game on Sunday, as both of his brothers will be playing, however, whether or not he breaks his silence once he’s back in the public eye for the first time since all of this has gone down remains to be seen. 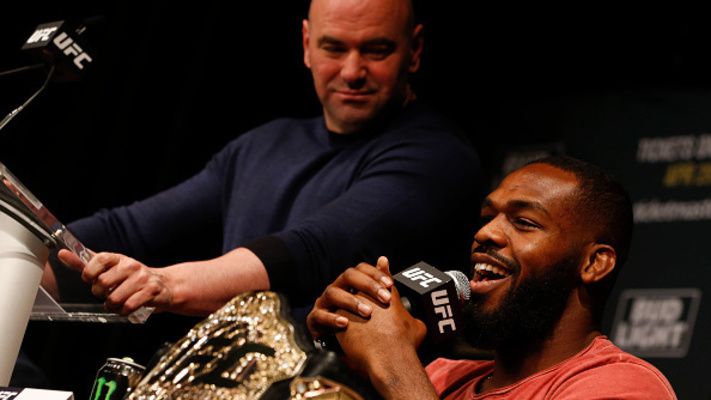