The following article was published on this day three years ago. It is presented to you in its original, unaltered form, courtesy of The MMA News Archives.

UFC lightweight champion Khabib Nurmagomedov was forced to pay a $500,000 fine for his role in the infamous post-fight brawl that he initiated following his win over Conor McGregor last October.

Just seconds after Nurmagomedov secured a fourth-round rear-naked choke finish, he leaped over the cage to go after McGregor’s teammate Dillon Danis, who was working in his corner for the fight.

Chaos ensued immediately afterwards but security quickly contained the ugly incident but the commission wasn’t going to let it go without handing down some stiff penalties for everybody involved.

UFC president Dana White has definitely gone back and forth with the Nevada Commission in the past over certain decisions that have been made and in this case, he believes Nurmagomedov got a raw deal when it comes to his punishment for the brawl.

“I was obviously surprised by how much they put on Khabib,” White told ESPN on Wednesday. “You’ve got a half-a-million dollars and six months [suspension] if he does some [public service announcements]. What he did was wrong, he jumped out, we had the whole thing contained in seconds.

“I don’t know. It was a little harsh in my opinion but it is what it is.”

The commission also took exception to the excessing amount of trash talking between Nurmagomedov and McGregor that led to their fight at UFC 229.

As personal as things may have gotten, the fight ended up as the biggest UFC pay-per-view of all time while the promotion put out a study earlier this week showing more than $86 million in revenue was generated for the city of Las Vegas by that single event.

White obviously doesn’t agree with trying to police what the fighters are saying to each other in the lead up to a fight, especially when it oftentimes leads to the biggest rivalries in the history of the sport.

“Here’s the thing — it’s a fight. At the end of the day, it’s a fight,” White said. “Sometimes you come across people that don’t like each other and there’s a lot of bad blood. That was the case in this fight. This is what we do. This is the fight business. These guys are talking about fighters saying mean things to each other and all this other stuff.

“If you break it down and go back to when [Muhammad] Ali fought [Joe] Frazier and you look at the times when that happened, the stuff that he said about Frazier and saying to Frazier was horrible. Horrible things that you don’t say to somebody else back then.”

It’s tough to imagine the Nevada commission actually attempting to curb trash talk before a fight but either way they definitely made Nurmagomedov pay for his choices after the fight was over.

Through his manager Ali Abdelaziz, Nurmagomedov has reportedly stated that he will no longer fight in Nevada as a result of this harsh penalty.

Was the Nevada commission wrong to fine Khabib Nurmagomedov so much money? Sound off in the comments and let us know! 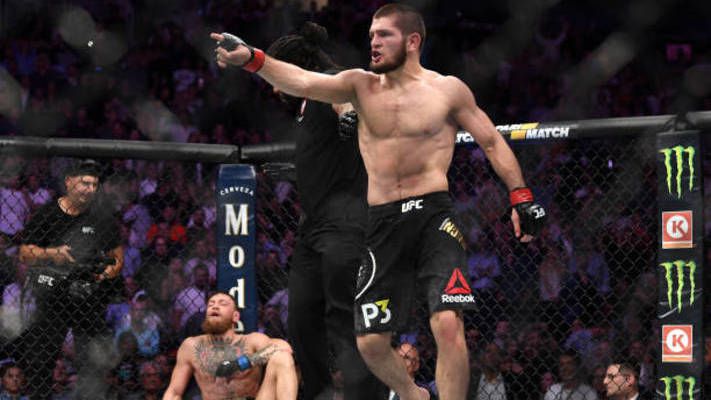