[ARCHIVES] Usman and Covington Nearly Come To Blows After UFC 235
published on November 6, 2021
curated and posted by BRWLRZ Team

Tonight at UFC 268, Kamaru Usman and Colby Covington will square off again in a rematch of their UFC 245 classic. But before their first bout, they almost had their first battle in a Las Vegas buffet line! The following story below provides the details and is presented to you in its original, unaltered form, courtesy of the MMA News Archives.

New UFC welterweight champion Kamaru Usman wasted no time coming face to face with his next opponent after a brawl nearly broke with Colby Covington on Sunday in Las Vegas.

The entire incident was captured on video as Usman and his entourage appear to show up at the buffet inside the Palms Hotel and Casino in Las Vegas where Covington was already waiting in line.

It’s unclear what set off the altercation but it looks like somebody from Usman’s camp goes after Covington as employees try to defuse the situation with women and children standing in the same line.

There is audible screaming heard from some of the patrons when one of Usman’s friends charges at Covington as he backs away and shouts at the welterweight champion and his team.

Usman’s manager Ali Abdelaziz then gets into a shouting match with Covington and then takes a swing at the former interim champion.

As for Usman, he definitely had words with Covington but he actually appeared to attempt to defuse the situation while standing near his next opponent but never actually making any physical contact with him.

According to the report from TMZ, police were not called to deal with the incident but security intervened and escorted everybody out of the building.

Usman is expected to make his first title defense against Covington later this year. 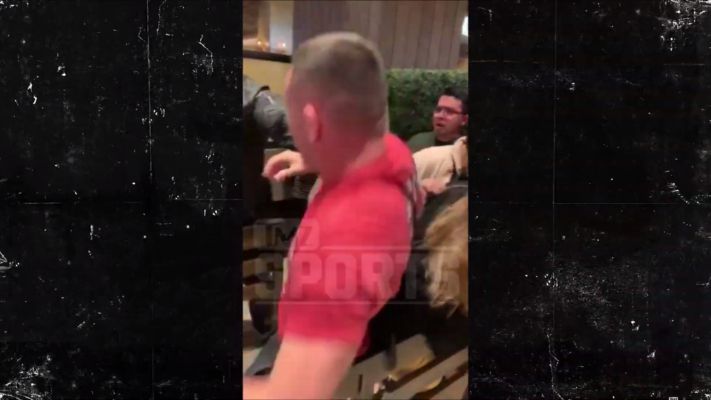