Archives: Shields Vows To Prove Boxers Can Succeed In MMA (2020)
published on December 27, 2021
curated and posted by BRWLRZ Team

On this day one year ago, we ran a story about Claressa Shields‘ insistence that she will be the individual to prove that boxers can succeed in MMA. One year later, her record sits at 1-1, with Shields losing her most recent bout to Abigail Montes at the 2021 PFL Championships in October.

Although it cannot be denied that Shields suffered a setback and has much work to do before she can be successful in her mission, she has let it be known that she will not be deterred by her first defeat.

Here is a look back at Shields’ mindset before she ever stepped foot into an MMA cage in this story published one year ago. The following article is presented to you in its original, unaltered form, courtesy of The MMA News Archives.

PFL newcomer and boxing world champion Claressa Shields is eager to prove that boxers can indeed be successful in MMA.

Some would say that there is a common perception that boxers do not have what it takes to be successful at the highest level of MMA. Case in point, just ask anybody what Floyd Mayweather’s chances would have been against Conor McGregor in an MMA bout. Whether a casual fan or a hardcore MMA aficionado, odds are you would get a response of McGregor being at least a -1000 favorite after the person scoffed at the very question.

This belief is further perpetuated by the precedent of one James Toney, a former boxing heavyweight champion who attempted to cross over into MMA, only to get submitted in the first round of his lone MMA fight. This has served as a precautionary tale for boxers ever since.

But now, there’s Claressa Shields, an Olympic boxing gold medalist who is venturing into MMA full time in the Professional Fighters League. Shields feels that it goes beyond a perception that boxers can’t cut it in MMA but that it is a full-blown myth, one that she cannot wait to burst.

“Listen, I’m excited and I’m just ready to prove everybody wrong,” Shields told MMA Fighting. “Not everybody but all the doubters. It seems like everybody keeps saying like ‘oh anybody that’s come from boxing can’t be successful in MMA.’

“Like they say look at James Toney, and I kind of laugh cause James Toney was 42 years old. I’m 25. He was also 42 years old and he went in there, I don’t know how long he prepared but he fought against one of the best guys that they had. It’s not that I wouldn’t do that, but I’m preparing. I’m taking it one step at a time.”

It is true that James Toney’s submission loss came to a UFC Hall of Famer (Randy Couture) and that he was indeed 42 years old at the time. Claressa Shields, on the other hand, is only 25 years of age and is arguably the best female boxer in the world. And most importantly, unlike Toney, Shields is fully invested in putting in the work to becoming a complete mixed martial artist.

“I’m not an egotistic person,” Shields said. “I am the best woman’s fighter in the world. There is no other woman fighter in boxing that can beat me in boxing, for sure. But going over to a whole other sport and saying that, it’s just not true now. I have to work my way up from the bottom and learn and train and drill.”

Claressa Shields plans to begin her mythbusting expedition around May or June of 2021 in a non-tournament fight in the PFL.

Do you believe there is a myth that boxers can’t cut it in MMA and that Claressa Shields will debunk it? 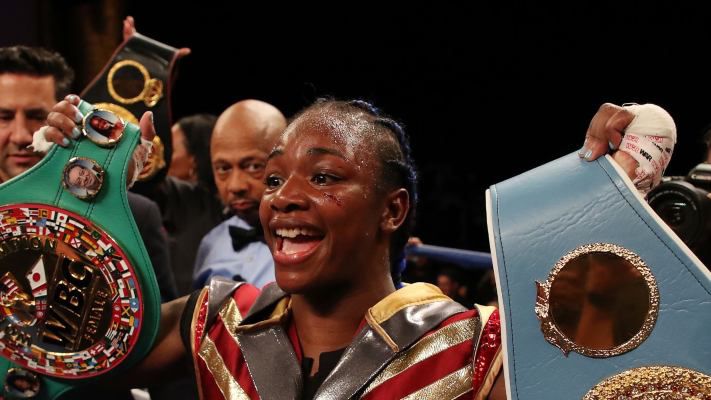