Six years ago today, we covered Joe Rogan breaking down what would be needed in order for Ronda Rousey to defeat Holly Holm after her lopsided loss at UFC 193. Once a believer that Rousey could defeat half of the men’s bantamweight roster and Floyd Mayweather, after witnessing “Rowdy’s” first MMA loss, Rogan’s tone shifted.

On this day six years ago…

While there is still a lot of talk about the fight after the fact, it is UFC commentator Joe Rogan who continues to be the most vocal about the potential rematch between Ronda Rousey and UFC Women’s Bantamweight Champion Holly Holm.

“Ronda’s got to go to a camp that has the full arsenal,” Rogan told Stephie Haynes of Bloody Elbow. “She’s got to go to a Firas Zahabi or a Matt Hume, or someone like that, in my opinion. If I was talking to her, that’s what I would tell her. I’d say, ‘You can’t just train with a judo coach and Edmond holds the pads for you.’

“Edmond has definitely done some great things for her boxing technique, that can’t be denied. Her combinations when she hits the pads are very impressive, but there are other elements that come with striking. It’s not just about throwing your hands and having the technique look good.”

Rogan elaborated, explaining why he feels Rousey needs a “massive overhaul” if she wants to have a chance at winning her title back from the former multiple-time women’s boxing champion.

“She’s gonna need a massive overhaul. When we talk about MMA being high level problem solving, Holly Holm solved the problem. She had all the answers and she got a f*cking A+.”

Rogan, who juggles a stand-up comedy career with his UFC announcing duties, knows what it takes to make it in both worlds. The biggest factor that allows him to be both a celebrity and fight announcer is the fact that he doesn’t have three or four month camps and an insane amount of media obligations for his UFC announcing gigs. It is this reason why Rogan insists “Rowdy” Ronda needs to decide whether she wants to be a “gigantic celebrity” or “the best fighter on the planet.”

“You don’t want to be good enough, you want to be the best that you can be. I don’t think she was the best that she could be. In my eyes, she was not properly prepared for that fight, whether physically or technically.” 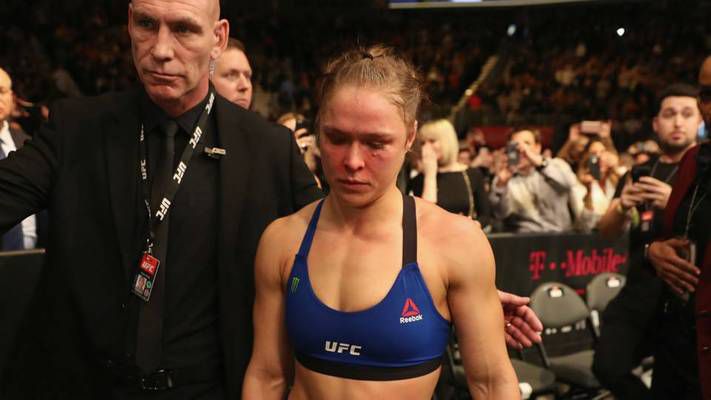