Following his brother Nate Diaz‘s wild scene with Conor McGregor at the final UFC 202 pre-fight press conference in Las Vegas, Nevada, Nick Diaz was part of an even crazier scene in Vegas this week.

On Wednesday evening, TMZ.com reported that the elder Diaz brother was involved in a fight that broke out in a nightclub on the strip in Vegas.

According to multiple eye-witnesses, Diaz was actually not the aggressor or instigator in the situation. In fact, he was apparently the direct opposite.

TMZ noted in their report that Diaz was going to the bathroom at 2:30am local time in Vegas when he accidentally bumped into someone. The guy he bumped into, unaware of who Diaz was, began talking trash and insulting the former UFC title contender until a couple of his friends saw and the three — or four — of them ganged up and started an unfair 3-on-1 or 4-on-1 fight with the MMA mega-star, who was also on hand for the aforementioned melee at the UFC 202 press event in Vegas last week.

Diaz, who has been at the center of multiple brawls in the past at MMA events, including one giant black eye — particuarly at the time — for the sport, when he and his Cesar Gracie teammates, also known as “The Scrap Pack,” instigated a major brawl with Jason “Mayhem” Miller during his post-fight interview in the cage live on television.

The following is an excerpt from the TMZ article regarding the Diaz nightclub incident this week:

We’re told Nick apologized and said he didn’t want any trouble, but 3 other men then joined the first guy and jumped Nick … who tells us, ‘I didn’t start it. They didn’t know who I was.’

He tried to defend himself, and got hit hard in the head — and then the fight spilled out of the bathroom, and out onto the Bellagio’s casino floor.”

Additionally, Brett Okamoto of ESPN.com took to social media with some details he learned regarding the incident. You can also check out some footage of Diaz partying in the nightclub, but not the actual brawl, which the Stockton native released himself, by clicking here. The footage is different than the video at the top of this page, which is the video released by TMZ Sports that features one of their reporters describing the story.

Spoke to a rep from the club who confirmed Nick wasn’t the problem. Exact words, “Nick was very well behaved.” https://t.co/Fs2HVwZHWj 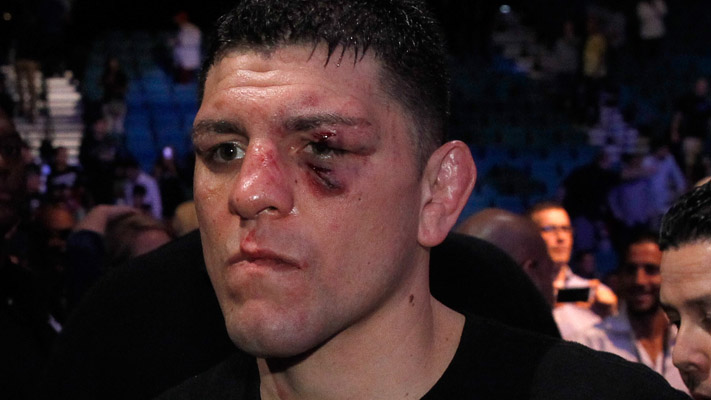