Diaz hasn’t competed since Jan. 2015. There’s no doubt that many fight fans have been hoping for his return. Diaz is eligible to fight again after running into some issues with the Nevada State Athletic Commission over marijuana use and the U.S. Anti-Doping Agency (USADA) for whereabouts failures. Still, Diaz has yet to take a bout.

Diaz is aware of the crazy boxing vs. MMA proposal bouts such as Floyd Mayweather vs. Khabib Nurmagomedov. Diaz told TMZ Sports that Alvarez wouldn’t be much of a challenge for him and isn’t comparable when it comes to drawing power (via BJPenn.com):

“I’ve never even thought about that, but the guy is moving up to 168 and fighting some no names. Let’s be real Canelo moving up to my weight, he ain’t gonna win that fight. No way, come on man. You’re just basically one of them little guys I spar before I fight. I am a professional fighter, I’ve had over 37 fights. Nothing personal. Motherf**ker don’t speak English so he ain’t knowing what I’m saying anyway. Y’all getting the money, if y’all gonna make all that money, making billions of dollars or millions of dollars now, I’m a better fighter, I’m a bigger draw.”

Alvarez recently signed an 11-fight, $365 million deal with sports streaming service DAZN. Mayweather recently ripped the signing and said it only takes him 36 minutes or less to make $300 million. Mayweather and Alvarez fought back in 2013 with “Money” emerging victorious.

Do you think Nick Diaz can be a needle mover for the UFC now? 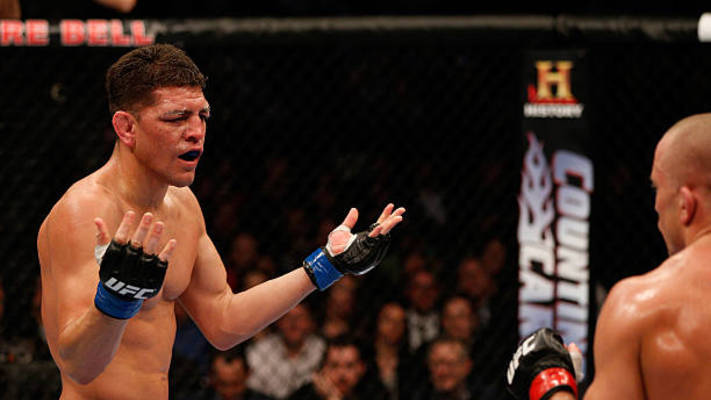