Nick Diaz apparently wants to fight heavyweight champion Daniel Cormier in his return to the UFC.

On late Thursday night, Diaz unleashed an Instagram post aimed at both Cormier and former UFC heavyweight champion Brock Lesnar, who made his return to the Octagon this past Saturday night at UFC 226.

Diaz took aim at Lesnar getting a title shot in his return to action after two years away mostly because the former welterweight title contender doesn’t like the professional wrestling antics that were used to promote his appearance on the card.

Meanwhile, Diaz also had problems with Cormier for engaging in the melee with Lesnar while also criticizing the new heavyweight champion for his performance against Anderson Silva at UFC 200 back in 2016.

“Sick of this all this baddest man on the planet B.S. I’ll fight for any title at any weight,” Diaz said. “UFC wants to make B.S. WWF fights with guys that fight like s–t and put on an act. Daniel Cormier would look way worse than I do in this pic if he fought Anderson [Silva] the way I did but instead he decided to wrestle f–k him for five rounds in front of his whole life and still almost got finished off in the last round with Silva only having two or three weeks notice.

“Dana White should give me this fight instead of d–k chest Brock Lesnar’s cheating ass. Don’t be scared homie. Nothing personal. I love DC but I don’t like what he does constantly, embarrassed for him and the sport. I [started] doing MMA because it’s not WWF and I’ve never put on a B.S. act in my life. I’m sure fans would like to see a real fight.”

Diaz has been teasing a return to fighting in recent months but hasn’t actually competed since 2015 when he faced Silva in a middleweight matchup.

Following that fight, Diaz faced a lengthy suspension after he tested positive for marijuana and has largely avoided any conversations about fighting again since that time.

Over the past few weeks, Diaz has been in the spotlight for all the wrong reasons after he was arrested in Las Vegas where he currently faces several felony charges after he was accused of assault in a domestic violence case.

This latest post seems to indicate that Diaz wants to fight again but it’s tough to imagine the UFC will take him up on his offer to face Cormier in a heavyweight title bout.

Would you watch Nick Diaz vs. Daniel Cormier in a heavyweight fight? Sound off in the comments and let us know! 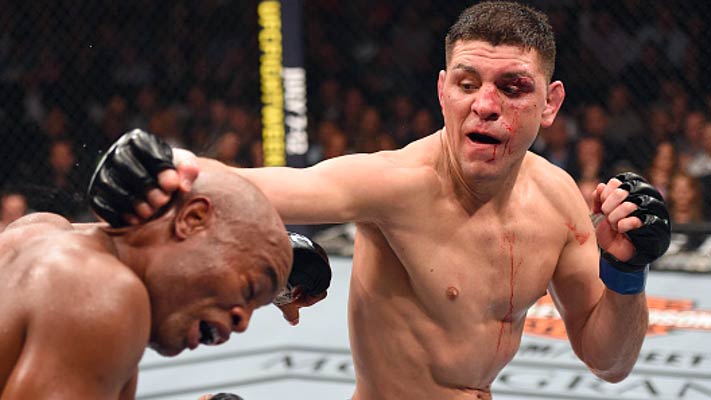