Tonight at UFC 270, Brandon Moreno will look to retain the UFC flyweight championship against Deiveson Figueiredo to bring a close to their trilogy in his favor. As you’ll find in the following article from last year, there hasn’t been much love lost between these two competitors in quite some time.

There is no love lost between flyweight champion Deiveson Figueiredo and Mexican challenger Brandon Moreno ahead of their UFC 263 showdown.

Last time, Figueiredo and Brandon Moreno met at UFC 256 last December where the fight became an instant candidate for “fight of the year” honors. Despite the fight between Figueiredo and Moreno not having a clear winner, there is an unsatiable appetite to see these two flyweights run it back. After all, since their last bout ended in a majority draw, it’s only right that these two fighters square up again to determine who is the rightful undisputed champion.

Going toe-to-toe for twenty-five hard minutes, each fighter had big moments in the first fight. However, it was the champion’s right-hand piston that continued to stagger Moreno throughout the night. As the rematch approaches, Moreno had no kind words for the champion leading up to their rematch on June 13 in Phoenix Arizona in front of a sold-out crowd.

“Man, I told you, the guy’s not really smart. He’s an asshole and it’s fine, I don’t care. He’s ugly. Man, the guy’s so ugly. My goodness. I can’t believe it,” Moreno said to TMZ Sports.

It seems Brandon Moreno didn’t have anything nice to say when asked about fighting the champion in June. In fact, it seems some animosity is building between the two flyweights as we lead into their last few weeks of fight camp.

Overall, the initial fight was closely contested and for the first time in many ways, fans got to see Figueiredo fight out of some bad positions. In particular, Moreno was able to time and score some effective takedowns. For the most part, “Deus Da Guerra” managed to get back to his feet pretty quickly, but the takedown pressure certainly wore on the Brazilian champion as the rounds progressed. Undoubtedly, it will be interesting to see how each fighter approaches the rematch since the first fight was razor close.

Who is your pick in the flyweight title fight between Brandon Moreno and Deiveson Figueiredo? 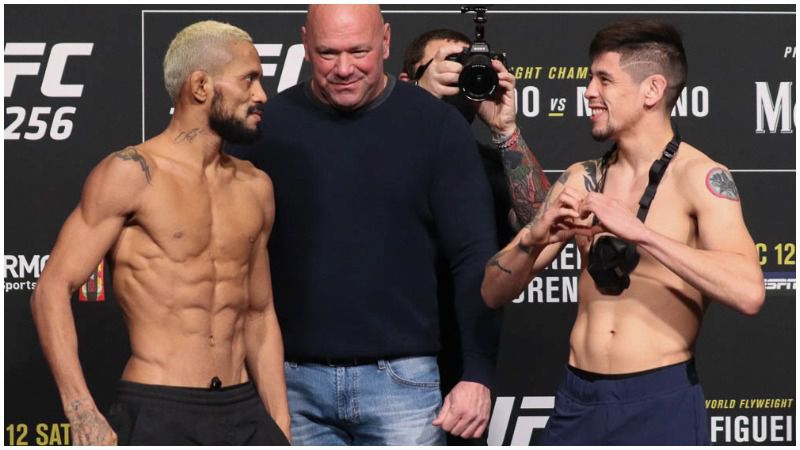