Yesterday, we shared an editorial from last year that documented Jon Jones‘ chaotic drug-testing history. Once the news broke of another atypical test finding for Jones, Daniel Cormier was expectedly one of the first to react. Stipe Miocic would then react to Cormier’s reaction, five months after DC defeated him for the UFC heavyweight championship.

The following story is presented to you in its original, unaltered form, courtesy of the MMA News Archives.

Current UFC “Champ Champ” Daniel Cormier’s mixed martial arts (MMA) career is coming to an end. Cormier has said that, following his heavyweight title defense over Derrick Lewis in November, he has one fight left in him. It’s believed that fight will be against the returning Brock Lesnar sometime in the first quarter of 2019. However, it’s also believed Cormier will fight longtime rival Jon Jones once more before retiring as well.

Should that take place, however, there will always be doubts about Jones’ competitive integrity. After having issues with the United States Anti-Doping Agency (USADA) in the past, Jones has once again found himself in a bit of controversy. “Bones” is set to face Alexander Gustafsson in the main event of this weekend’s UFC 232 pay-per-view (PPV). Initially, the fight was to take place in Las Vegas.

However, traces of turinabol were recently detected in Jones’ system. It has been said that those traces are leftover from Jones’ initial failed drug test last year, and are not new traces. Despite this, the Nevada State Athletic Commission (NSAC) did not license Jones to fight this weekend. This forced the UFC to move UFC 232 from Vegas to California, where Jones was able to get licensed.

After the news initially broke, Cormier took to Twitter to react:

“I know you are and that’s why It was a pleasure in the lead up to the fight with you, and if we do it again it will be the same.”

What do you make of Miocic’s message to Cormier after Jones’ drug test incident? 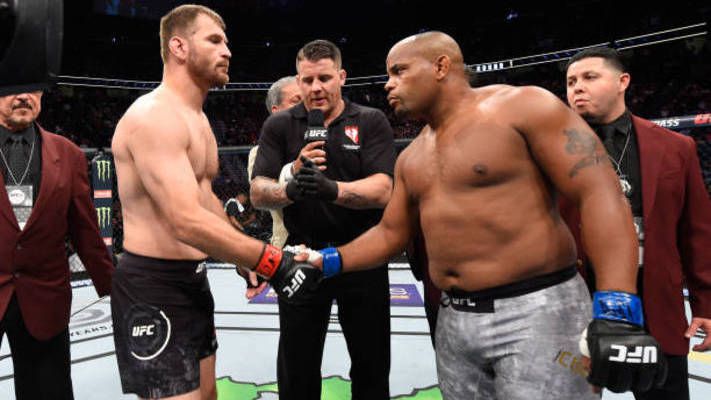