The following is an article from earlier this year, featuring one-half of tonight’s UFC 269 headliners and current lightweight champion Charles Oliveira. The article is presented to you in its original, unaltered form, courtesy of the MMA News Archives.

For the second straight pay-per-view, Conor McGregor let the winner of the main event know that he was coming for his championship belt.

When Conor McGregor put Kamaru Usman on notice that he was coming for his welterweight title after UFC 261, Usman accused him of “clout chasing,” stating that McGregor knew full well he didn’t really want to fight him. Others have also accused McGregor of this in the past whenever he would react to a big performance from another fighter soon after an event had concluded.

In this case, McGregor’s post-UFC 262 tweet is fairly safe from this suspicion due to the relevancy the main event had to his own short-term future.

Congrats to Olivera on becoming the 11th UFC lightweight champion.
Wonder who Twelve is…

“Congrats to Olivera on becoming the 11th UFC lightweight champion. Wonder who Twelve is…” McGregor wrote.

The usually even-keeled Charles Oliveira issued the following response to McGregor after soaking in his newly won UFC lightweight championship over Michael Chandler.

“Conor, worry about Dustin,” Oliveira advised through an interpreter at the UFC 262 post-fight press conference. “Conor, since you’re so tough: First of all, you beat Dustin, and then you come over to Brazil and I’m going to put you on your ass. First he’s got to get past Dustin. He’s one of these guys that just talks a lot. He’s got to beat Dustin first.”

Charles Oliveira’s come-from-behind victory over Chandler matched the Brazilian’s path to the title shot in the first place: It was hard-earned and full of adversity. The fact that the UFC all-time submission holder got it done with his hands is a testament to how far he’s come as a mixed martial artist since debuting in the UFC at only 20 years old more than a decade ago.

Oliveira was willing to fight whoever was put in front of him along the way, so he is not committed to the idea of fighting Conor McGregor despite his fired-up response. Instead, he’s decided to stick to his job of showing up and winning.

“I battled hard to get here,” Oliveira said. “Everyone’s talking about who it’s going to be next – Poirier or Conor. I’ll leave that my manager, and I’m going to go home and rest.”

How do you think a fight would go between new UFC undisputed lightweight champion Charles Oliveira and Conor McGregor? 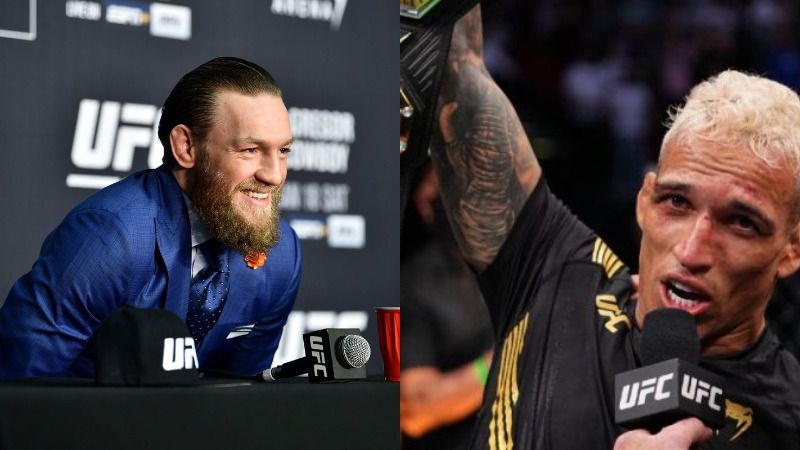