Archives: McGregor: I Am Going To Break Mayweather’s Face (2016)
published on December 26, 2021
curated and posted by BRWLRZ Team

One year prior to the blockbuster MayMac event, Conor McGregor was already calling his shot when envisioning a superbout against Floyd “Money” Mayweather.

As we know, McGregor did not emerge victorious from this historic bout, but he no doubt picked up thousands if not millions of additional fans for his promotional work leading into the fight and his valiant effort inside the boxing ring.

Here is a look back to when McGregor was hyping up a boxing match that no one ever thought would or even could happen. Yet, McGregor was arguably the biggest driving force that made it a reality. And that, in itself, is a victory.

The following article was published five years ago to this day, and it is presented to you in its original, unaltered form, courtesy of the MMA News Archives.

On this day five years ago…

Headline: McGregor Posts Another Mayweather Tease: “I Am Going To Break His Face”

As 2016, one of the craziest years in MMA history, comes to an end, two-weight UFC World Champion Conor McGregor checks in with one last “Notorious” tweet to hype up the fantasy boxing match that fans are chomping at the bit for.

Featured below is the latest Twitter offering from UFC’s Irish-born mega-star. As seen in the tweet embedded below, McGregor posted a photo of himself wearing boxing gloves in a new split-screen shot that also features boxing’s pound-for-pound king, Floyd Mayweather.

The caption for the photo reads: “I am going to break his face.”

As noted, “The Notorious” Conor McGregor recently acquired his boxing license for the state of California. As Mayweather pointed out, this means very little, as “Money” Mayweather typically fights in Las Vegas, Nevada, a city that McGregor has claimed he will never fight in again after what he felt was unfair treatment he received as a result of his “Bottle Gate” fiasco with Nate Diaz ahead of their UFC 202 rematch earlier this year.

As 2017 approaches, the fight world continues to wait for any real sign that a McGregor-Mayweather showdown is possible. For now, we’ll have to continue to find enjoyment out of the small teases that both McGregor and Mayweather continue to strategically keep going in the media. 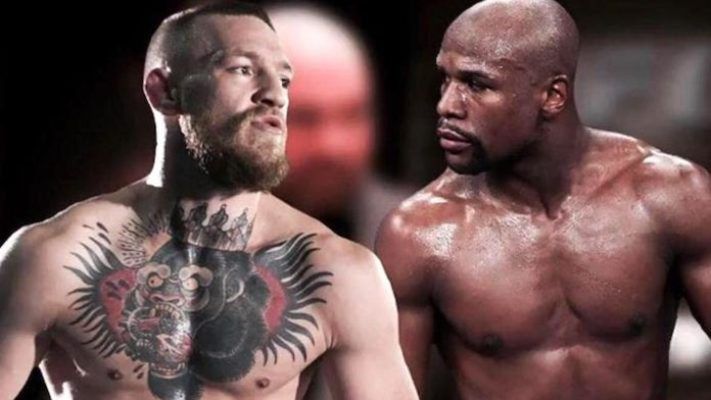