On this day, three years ago, Tito Ortiz defeated Chuck Liddell via KO in an event put on by Golden Boy Promotions. After Ortiz picked up the KO victory, the MMA world inevitably reacted. That includes former UFC light heavyweight champion Jon Jones. The following article is presented to you in its original, unaltered form, courtesy of the MMA News Archives.

Jon Jones doesn’t want to hear Chuck Liddell calling for a fight against him again.

Liddell returned to action last night (Nov. 24) for the first time since June 2010. “The Iceman” left the sport of mixed martial arts having been knocked out in his last three fights. His return against Tito Ortiz resulted in another knockout loss.

Jones is well aware of how Liddell fared in his return. “Bones” took to Twitter to add insult to injury:

Yeah it’s official, I am never replying to chuck calling me out again. https://t.co/oDYJ91Aes0

“Yeah it’s official, I am never replying to Chuck calling me out again.”

Liddell and Jones have had back-and-forth exchanges in the past. Jones has even entertained a sparring session with Liddell, offering to pay for his trip to Albuquerque, New Mexico. It appears that offer is now off the table.

Jones is set to collide with Alexander Gustafsson in a rematch for the Ultimate Fighting Championship (UFC) light heavyweight title. The bout is scheduled to headline UFC 232 inside the T-Mobile Arena in Las Vegas, Nevada on Dec. 29. It’ll be the UFC’s final event of 2018.

“Bones” hasn’t been in action since July 2017. He initially earned a knockout victory over Daniel Cormier to reclaim the light heavyweight title. The result was overturned when Jones popped for turinabol. He was suspended by the U.S. Anti-Doping Agency (USADA), but is now eligible to compete again. Jones agreed to give USADA “creditable substantial assistance” in exchange for a reduced sanction.

Do you think Jon Jones is being petty, or does he have a legit gripe with Chuck Liddell? 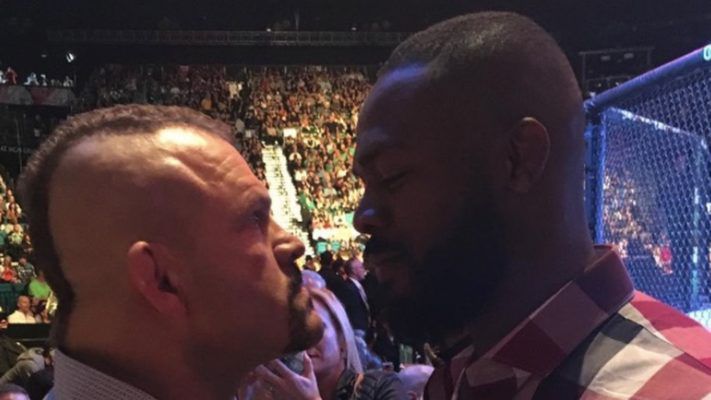