[ARCHIVES] How Many Alex Hernandezes Are Out There?
published on October 3, 2021
curated and posted by BRWLRZ Team

There are millions of tough people in the world today who can scrap. There are thousands who, given the right gym, could have successful MMA careers on the regional circuit. There are thousands of active MMA fighters in the world today and hundreds who are competing with a lot of promise right now. Each of the above facts cannot be questioned. The question we are left with after what took place at UFC 222 is: How many Alex Hernandezes are out there?

One year ago, Alex Hernandez was still working a day job as a loan officer while competing in MMA. And one week ago, he was one of the hundreds competing at a high level and yet waiting and hoping for a call up to the UFC. After starching Beneil Dariush via first-round KO, he’s no longer one of the hundreds…he is likely to be hairs away from being in the top 10….Just. Like. That.

Heading into UFC 222, there were new names being hyped up, to be sure…neither of which were Alex Hernandez.  And how could anybody hype him? Unlike Sean O’Malley and Mackenzie Dern, Hernandez is not an easy guy to find film on. And more to the point, the name itself was one that, two weeks ago, hadn’t been known to even the most hardcore of MMA fans. While Hernandez did not exactly provide fans or experts with a ton of film to work with on Saturday, he was sure to properly introduce himself. To paraphrase the truthful words of Alex Hernandez, if you didn’t know him before, you definitely know him now.

Sadly, although we all know him, not everybody is properly remembering him. In the post-fight presser, Dana White was peppered with questions about the fresh-faced, gutsy Sean O’Malley (deservedly so), but Alex Hernandez’s name didn’t come up, even after a first-round KO of the #12 ranked lightweight in the company. So it looks like Alex is going to have to keep putting his name out himself with his words, and then ensuring it is properly translated with the universal language of both hands.

Prior to UFC 222 in an interview with MMANews contributor James Lynch for Fightful.com, Hernandez was very clear on his approach to his fight with Beneil Dariush:

The self-assurance in Hernandez’s speech had a different tenor than the almost scripted, predictable false bravado we hear from fighters all the time. Here was a guy who was speaking as someone not just happy to be granted an opportunity but who had a true, unwavering belief that he would make the most of it. And why wouldn’t he? His only career loss came in 2013 in his third career fight, and five of his last six fights have been won by stoppage. And did I mention he has only been training full time for a year now? And when he trains, his mindset is focused on one thing: himself. “I don’t train for any opponent ever,” Hernandez said when asked about getting the short-notice call up to face Dariush.

“Dariush or anybody, man, it doesn’t really matter.”

When asked if that meant he had no respect for his ranked foe, Hernandez was quick to clarify,

“Of course I respect him, but I’m going to run through him.”

And run through him is what he did.  From the word “fight,” Hernandez charged forward and put action behind his words:

The kick said to the world, and more importantly Dariush, “Damn your ranking. Damn standing on ceremony. Damn etiquette. And damn your experience. For these next short minutes, this Octagon belongs to me.”

Well, it wasn’t logical. It was wrong. And Beneil Dariush’s demeanor seemed to be the embodiment of that assumption. He was a man unwilling to change his strategy when faced with a young competitor who was starving and ferocious.

No, even though Dariush’s best work has historically been on the mat, he decided to stand right in front of a fighter who had already shown his game plan and a decisive speed advantage on the feet, and he paid the price for it. Dariush had an almost overconfident and overrelaxed disposition, and he was met with a dynamic, precise, and swifter fighter. Hernandez predicted that Dariush would not be able to match his pace or his physical or mental cadence; and as Hernandez stated after the fight, the bout materialized just as he said it would.

So how many Alex Hernandezes are out there in the world? I don’t know. But if his performance Saturday night, his palpable confidence inside and outside of the cage, and his post-fight message to the world of who he is are any indicators….maybe, just maybe, there is only one.

Be sure to stick with MMANews.com daily for the latest breaking news in the MMA world and also follow MMA Logic on Facebook: https://www.facebook.com/MMALogic/ 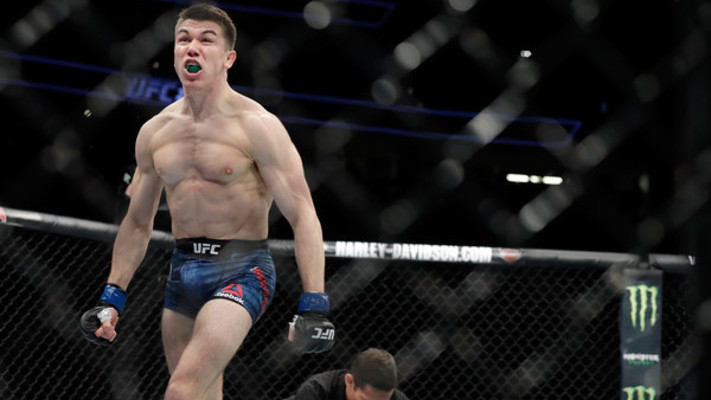