Archives: Garbrandt Storms Off Joint-Interview To Look For Cruz (2016)
published on December 12, 2021
curated and posted by BRWLRZ Team

Cody Garbrandt has always been a bit of a hothead, and fans at home caught a live glimpse of this in 2016.

Tonight, both Cody Garbrandt and Dominick Cruz will be competing at UFC 269, but much has changed since their 2016 bout. For one thing, neither man is in the top 5 at bantamweight anymore. In Garbrandt’s case, he isn’t even in the division at all.

But five years ago, Garbrandt had all the momentum in the world and an undefeated record. He also had a deep animosity for then-champion Dominick Cruz ahead of their UFC 207 bout. Don’t believe me? Look no further than the following article we ran five years ago.

The following article is presented in its original, unaltered form, courtesy of the MMA News Archives.

Headline: Video: Garbrandt Storms Off Joint-Interview With Cruz, Goes Looking For Him

Featured above is an excerpt from the joint interview, which aired via The Fight Network based out of Canada, and saw Garbrandt threaten to leave and find Cruz, who he mentioned was only one room over from where he was currently sitting.

At that point, Garbrandt took his microphone off and apparently went in search of the reigning UFC 135-pound champion.

One day he won’t have to look for Cruz is this Friday, as Garbrandt becomes the latest member of the Team Alpha Male camp to try and dethrone the UFC’s longtime 135-pound champion when the two meet in the co-main event of Friday’s UFC 207: Nunes vs. Rousey pay-per-view event.

UFC 207: Nunes vs. Rousey takes place from the T-Mobile Arena in Las Vegas, Nevada, airing live on pay-per-view this Friday, December 30th. Join us here at MMANews.com on Friday evening for live round-by-round results coverage of the UFC 207 pay-per-view.

For more of The Fight Network’s coverage of UFC 207: Nunes vs. Rousey, visit their official website at FightNetwork.com. 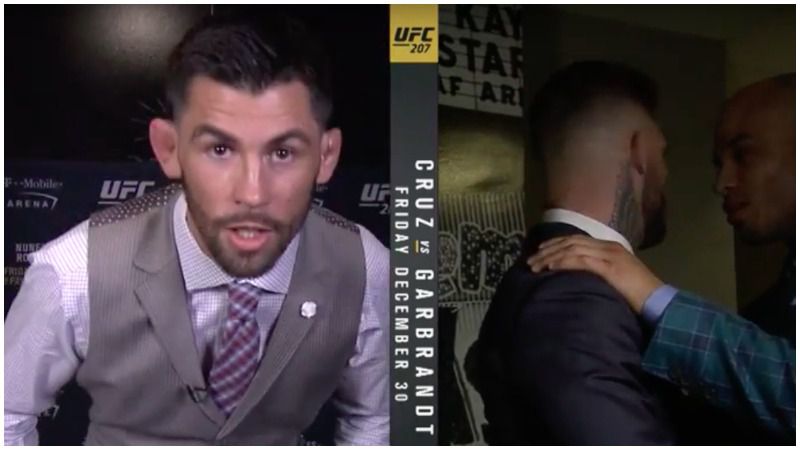