Dana White liked what he saw from Kevin Holland in his UFC debut.

Kevin Holland found victory in Season 2 of Dana White’s Tuesday Night Contender Series with a unanimous decision over Will Santiago, but he did not find a UFC contract. Discussing how Holland came to be selected to fill in as a late replacement to face Thiago Santos at UFC 227, White began with why Holland was not originally offered the contract after his DWTNCS performance:

“He’s a talented guy and he won his fight, but he wouldn’t shut up,” White said at the UFC 227 Post-Fight Press Conference. “The entire fight he was talking to me – the whole fight.” This guy comes in and is talking shit the entire fight. So I said, ‘I’m not signing this guy. I don’t want him. I’m not interested.’”

So what changed? Frankly, White said, it wasn’t the heart, but it came down to no other options:

“Thiago Santos’ fight falls out, and I said, ‘Let’s call some Contender guys that we liked.’ They all turned down the fight,” said White.

“I said, ‘Call Big Mouth. I want to see if Big Mouth takes this fight.’ He took the fight. Came in and fought the fight. Still talking shit with Thiago Santos, this beast. Took this fight on two weeks’ notice and is still talking. Talking so much his mouthpiece fell out. But wow, he looked good.”

The boss wasn’t the only one impressed with Holland. Even the celebrities in attendance were abuzz following Holland’s gutsy and flamboyant performance:

“All the celebrities that were there loved Holland,” White said. “That’s all they wanted to talk about. They loved him.”

And the love from Dana and his celebrity pals will manifest in another opportunity for Holland under the bright lights, an opportunity well earned:

“Much respect to Holland,” White said. “He was very impressive tonight. He gassed out in the third, but he took this thing on two weeks’ notice. We’ll give him the proper time to train, get ready for a fight and we’ll give him another fight.”

What did you think of Kevin Holland’s UFC 227 Performance? 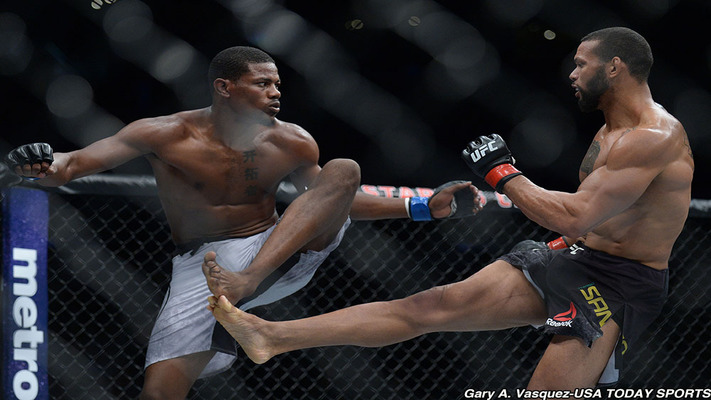