Anthony Johnson may not fight again for a little while.

Johnson was supposed to face Vadim Nemkov in the light heavyweight semifinals but was forced to pull out of the fight with an undisclosed illness. Now, according to Bellator President Scott Coker, “Rumble” is still dealing with that and remains out.

“I talked to him about a week ago and we had a very good conversation,” Bellator president Coker told MMA Junkie. “Without getting too much into his medical condition, he’s got to worry just about being healthy first. Fighting will always be there. I told him to keep doing what he’s doing, keep listening to the doctors and keep at it. We’re going to be here, we’re not going anywhere. If you get cleared at some point, we’ll definitely have you back.

“I think he has a little ways to go, to be honest, and we’re going to be there rooting him on. But until he gets clearance – I don’t look at it like he’s going to be fighting in six months or four months or eight months,” Coker continued about Johnson. “Let him take his time, let him get healthy and when he gets healthy we can have a conversation. If it’s a year from now, 18 months from now, or six months from now, we’ll get at it. But until then, he’s got to heal up and get healthy because there’s so much more in life than just fighting. I want him to have a long, healthy life and that’s the most important thing.”

Anthony Johnson had a successful Bellator debut back in May at Bellator 221, where he knocked out Jose Augusto in the opening round of the grand prix. It marked his first fight since UFC 210 where he was submitted by Daniel Cormier for the UFC’s light heavyweight title.

In his career, Rumble holds notable wins over Glover Teixeira, Ryan Bader, Alexander Gustafsson, Andrei Arlovski, Phil Davis, and Jimi Manuwa. He is also a fan-favorite due to his one-punch KO power, so the hope is he will be able to fight sometime in 2022.

Who would you like to see Anthony Johnson fight when he returns? 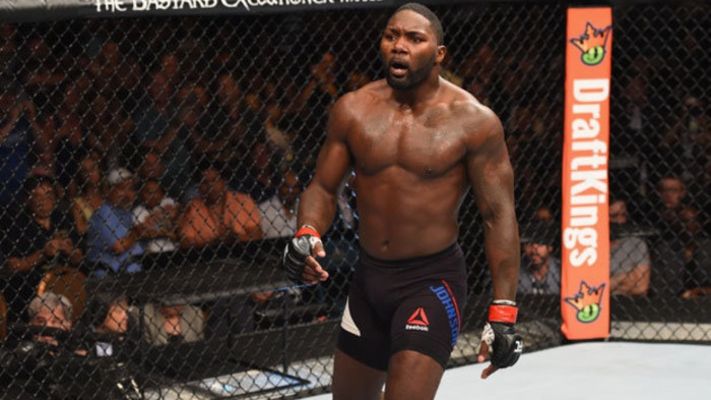